It's nearly impossible to cheat with these, unlike the standing lateral raise. For lifters having trouble getting a strong mind-muscle connection, the incline version is a better choice.

This exercise will also naturally put the resistance in line with the middle fibers of the delt. When you use a standing lateral raise it's common (and fairly natural) to work more in the scapular plane, which is slightly safer for the shoulder joint. But it also tends to make it more of an anterior deltoid movement, which we're trying to avoid since that's already been covered.

Since the resistance is more in line with the middle delt, and you can't cheat, you'll naturally bring the dumbbells directly up to your side. This is what makes it a great option for smoking the middle delts.

Lastly, if you want to keep tension on the shoulders as much as possible throughout the range of motion, then eliminate the bottom quarter of the movement. The delt itself isn't very active in the bottom part of the range of motion. It's the supraspinatus that initiates the abduction of the arm from this position, and then the delt takes over after that.

Once you lift the dumbbells to the top on the first rep, lower only about three-fourths of the way down before doing the next rep.

Try these with drop sets or cluster sets. Do 4-6 sets total in the cluster with 10 seconds between each set, going to total muscular failure on the last mini-set. 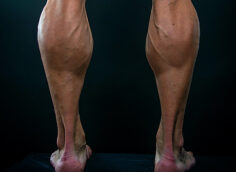 Maybe your calves aren't stubborn. Maybe you just haven't been executing your calf exercises correctly. Try this.
Gareth Sapstead May 15

Hitting each muscle group twice per week is perfect for most lifters. But how do you organize your training? Try these three splits.
Bodybuilding, Powerlifting & Strength, Tips, Training
Chad Waterbury April 4 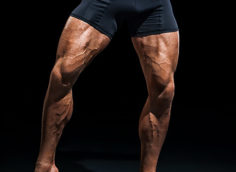 Most single-leg exercises require you to have the balance of a ballerina. That makes you have to use loads suited for a ballerina. Not these.
Training
Lee Boyce January 28