Maybe. But there are better ways of doing that. And those methods don't involve making another exercise (curls) less effective.

Regular paused squats are tough, but breathing paused squats take the pain - and the results - to the next level.
Training
Greg Nuckols September 2

How much should you be able to squat? That info and more here.
Powerlifting & Strength, Squat, Tips, Training
Todd Bumgardner June 5 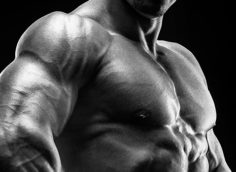 Increase power and build muscle with this Olympic-lifting variation. Check it out.
Training
Gareth Sapstead May 29