If you don't compete in powerlifting, should you test your max bench press regularly? No. But I do think testing an "everyday max" (EDM) can be valuable.

Your EDM is something you could do any day of the week, without having to get psyched up. Some lifters figure this to be in the range of 90% of their true max.

I use an EDM for both competitors and non-competitors alike because it at least sets a baseline for strength from which to program. Some people prefer the RPE (rate of perceived exertion) scale, but I've seen so many people who clearly have zero introspection about what a 7 or 8 RPE is that I'm just not a fan of it.

Technically speaking, I don't disagree with the coaches that say you don't need to ever perform less than a 3RM in training. The EDM will often correlate to a true 3RM, and if you're trying to build maximal strength and/or muscle then 5 reps should be the floor.

Are You Playing for Team Ass Clown?

The bench press does have a high degree of injury potential, but that's often associated with full-fledged ass clowns who max out almost every workout. I literally have no idea what the point of that is.

And yes, I've done it. And yes, it was stupid each and every time I did it. And yes, I was a card-carrying member of Team Ass Clown when I was training that way. And if you're doing that, so are you.

It's dumb, it's 100% ego driven, and you'll feel even dumber when you blow out a shoulder or pec and need surgery.

Training heavy comes with a myriad of dangers, even when you're taking precautions and using an intelligent program. There's no need to further exacerbate the danger by doing exceptionally stupid shit... like true 1-rep max bench presses all the time. 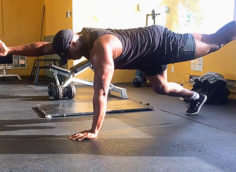 If your main goal is hypertrophy, this new progression model will help you build slabs of muscle. Take a look.
Tips, Training
Christian Thibaudeau September 14