The step-up. Nobody does it right, nobody coaches it right, and as a result it usually doesn't do much for you. If you can use a lot of weight, you're likely not doing it right. Unless you can squat at least 500-600 pounds using a high-bar style, it should be very hard to do proper step-ups with heavy weight.

What muscles should a step-up train? The quads, glutes and hamstrings of the leg that's on the box. But what's actually being trained? The calf of the leg on the floor and the lower back. Not ideal.

Most people start the movement by pushing the floor with the trailing leg. This is instinctive unless you force yourself to keep the toes of this foot elevated at all times (which pretty much nobody ever does). Sure, the front leg may also produce some force, but not much.

This initial push brings the lifter about halfway up, at which point he'll bend his torso forward to gain a mechanical advantage, then extend the back and leg simultaneously. So while the front leg does perform a bit of work, it's far from being the prime mover in the exercise, maybe in the last third of the range of motion.

The other issue: you can't do a proper eccentric (lowering) phase in a step-up. Most people simply step off the bench and let the back leg drop back down to the floor. So when you step off the box, your center of mass (the source of resistance) is far back from the point of your base of support (your front foot).

The unsupported portion of the body – pretty much your whole body except the front foot and ankle – is a lot heavier than the supported portion which means you simply can't control the movement on the way down. To do so you must bend forward a lot to bring your body back over the base of support. It just doesn't work.

So you have an exercise that'll do ZERO to build muscle. The target muscles are never significantly loaded and you can't control the eccentric. Plus studies have shown that concentric-only movements deliver a lot less growth than exercises with both concentric and eccentric tension.

A better option is the single-leg squat on a lateral box/bench. You could also call it a "side step-up" because the box or bench is at your side, not in front of you.

You need to do more push-ups. And you need to start doing them right for once. Here's what you need to know.
Bodybuilding, Powerlifting & Strength, Training
Mike Robertson January 19 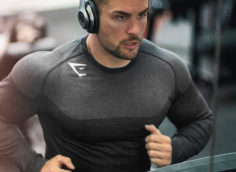