Multiple studies show that you can grow muscle without going to failure.

The trouble is, that seems to only apply to newbies. Scientists talk some college kids into participating in a research study about hypertrophy and sure enough, the test subjects do a few, casual, no-failure workouts right before their Role of Zombies in Western Culture class and their biceps scootch up a couple of millimeters.

But ask a lot of accomplished or experienced lifters and they'll tell you otherwise, that only by going to failure – at least occasionally – can you continue to make progress. Now saying that only by failing can you succeed sounds like a paradoxical Yoda-ism, ("Succeed can you only by failing?"), but it's largely true.

But like any weightlifting truth, the real answer is a little nebulous and before you discuss the merits of failure, you have to define it.

Most lifters regard failure as something you do to optimally stimulate all the muscle fibers involved in a particular lift. It's generally defined as the point at which you can't do any more concentric reps, but is that really failure?

Furthermore, reaching failure due to accumulated fatigue from doing a lot of sets is different than true muscular failure.

And even if you're talking about "true" muscular failure as the inability to do any more reps with a heavy weight, it doesn't mean you've exhausted all the motor units – just the ones that were recruited early on in the movement that have low endurance.

True failure would require doing some forced reps, or some drop sets, and even that's a matter of perspective because you could theoretically do a dozen drop sets, finally getting to the point where your fibers are so spent, you can't lift a single pound and are unable to defend yourself against even a pack of malevolent Cub Scouts.

Anyhow, to give our discussion any solid footing, we need to come up with a true definition of failure before we can make any generalizations and recommendations. So, for the sake of this article, let's define failure as the following:

Not being able to do any additional concentric reps on a set without getting an assist or lowering the amount of weight used, and then actually using one of those aforementioned two methods (forced reps or drop sets) to do a few more reps before hitting "true" failure.

So say you're doing curls. You rep out at 8, but then you do a few more reps, either by having someone spot you a few or quickly yanking off a plate or two and continuing the set.

It's definitely worth it to train to failure, but again, we're faced with the problem of how often and which exercises?

Powerlifter and author Thomas Baechle recommended doing full 1RM (training to concentric failure) one day a week and doing exclusively non-failure sets the rest of the week, but that only works if you do full-body workouts.

Another option is to program in short cycles (two to four weeks) where you train to failure on multiple exercises and then don't train to failure the rest of the time, but that seems overly cautious.

Here's what the research, my experience, and my gut tells me, though, about using training to failure to spur muscle growth: 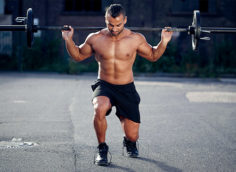