I was recently asked if I'd let my son compete in bodybuilding. I've wrestled with this question in the past. I'm a former competitive bodybuilder, not just a one-timer, so I'll focus on these particulars.

My son grew up in a household that was pretty balanced regarding fitness. Barbells are good things. Strength and muscle mass are empowering. Appreciation of healthy foods enriches life in a way most of the population simply doesn't grasp.

On the other hand, I didn't want him in the kind of environment to which I was sometimes exposed as a competitive bodybuilder or as a back stage attendee at big events.

Extreme calorie counting, eating disorders, full blown celebrations over just being allowed to eat a tablespoon of peanut butter (true story), endocrine damage, unbalanced narcissism – and occasionally at competitions even recreational drugs and overt deviance. I didn't even encourage him to attend my bodybuilding competitions, although he was welcome to.

Before I get hate mail for being seemingly hypocritical, I do love bodybuilding. It's just important to understand that I've seen some sketchy, damaging, and deviant stuff on its periphery. I know several journalists and organizers who share my view. Each has some mind-numbing tales, stories that may be more extreme at high-levels in the sport.

There seems to be a fine line between dedication and obsession in physique competition. I've been guilty of drifting into self-destructive "warrior mode" more than a few times in my career. I bet many readers can relate. The flip side of the dark underbelly is of course the discipline and courage to stand out that physique competitions can develop. These are the lessons any young person should be exposed to:

And all this for just a few minutes on stage. In many ways it's more of a total lifestyle commitment than other sports. Anything worthwhile in life comes with commitment and sacrifice.

I can only offer the "middle path" as an answer to this question, especially if the entry into competition would lead to further competitions. If there's a genuine calling to the sport and a seasoned guide who can keep the focus on the positivity and purity of what bodybuilding can be – then yes, I would want it for my son. But without a little idealism, balance, and a voice of reason at his back, I'd have to say no. 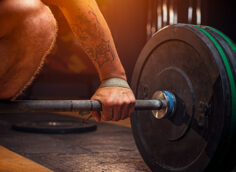 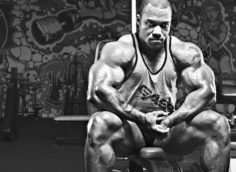