Years ago, Charles Poliquin wrote about an unusual arm workout performed on a Swiss ball. He described an exercise called the Gagné triceps extension. Just like many of Charles' concepts, it was somewhat unheard of at the time, yet brilliant.

Unfortunately, a scan of the web will reveal nothing else of this masochistic triceps-building move. It's kind of a ghost of an exercise... so let's bring it back.

These can be done on a stability ball or on the edge of a bench as shown. The ball acts as a useful pivot point and nothing more; it has nothing to do with working your stabilizers or proprioception or whatever. If you're using a ball instead of a bench, a standard 55 cm ball will do for most.

To get set up, position your upper back on the side of the bench (or ball), then get in a bridged position making sure your torso is as parallel to the floor as possible. Hold two dumbbells overhead using a hammer grip, or a single dumbbell between two hands. An EZ-bar would also work.

Starting with your torso parallel to the floor and dumbbells overhead, here's what to do next...

These work by applying a greater eccentric overload to your triceps' long-head in particular. This occurs when you've dropped your hips, while tension is also maintained at the top when your hips are bridged up. Maximal tension on your triceps is also better maintained throughout the exercise.

Eccentric training involves higher muscle forces, which can produce a large amount of mechanical tension and muscle damage. They also better activate high-threshold motor units, which have a greater capacity for growth.

Good luck putting on your jacket the next day!

Not only will this exercise strengthen your traps, it'll also keep your shoulders healthy. Check it out.
Tips, Training
Tony Gentilcore September 28 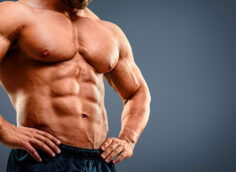