The deadlift is weird in a way. It's the one lift where smaller, less advanced people can put up big weight. You'll pretty much never see a 165-170 pound average lifter bench pressing 365 pounds, but the same guy might be able to deadlift 500 pounds. Not huge numbers, but respectable and enough to look impressive on social media.

Most of the time those lifts are achieved through sheer willpower and shitty/dangerous technique. While I respect and admire their grit, if it comes at the expense of proper form it can do more harm than good.

If you have to resort to bad form, the weight is too heavy and will be more detrimental than beneficial. Here are things that lifters do:

The whole back, upper and lower, is rounded like crazy, looking like a fishing rod when you catch a big fish. 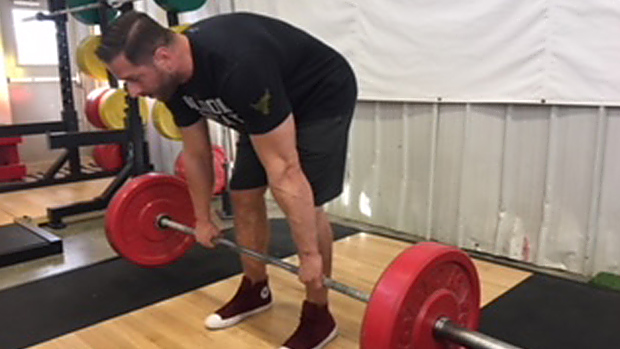 Sure, during a maximum effort there's bound to be some technique breakdown from time to time. If you're trying to win a competition and you pull out all the stops it might be acceptable, but if you're doing it to stroke your ego on social media it isn't.

Note: Some elite lifters do pull with a rounded back. But you'll notice that the back doesn't become more rounded as they lift; it stays in pretty much the same position for most of the lift. The fishing rod refers to a drastic rounding of the back while you're lifting. That change in position is the real danger.

There's a difference between training and competing. When you train you want to improve your physical capacities, lifting technique, and resilience to injuries... which means crappy form is not acceptable, and to most seasoned lifters, it's not impressive. In competition, do whatever it takes to win (within the rules). But last I checked, Facebook and Instagram aren't competitions.

Basically the lifter will pull the bar normally from the floor to just above the knees. The problem arises when the bar passes the knees. That's when the lifter will wedge his knees under the bar – moving them forward while raising his torso – and then finishes the lift by extending his legs. It can almost become something like a quarter squat.

The hitch gives the lifter a better leverage to finish off the rep. It's illegal to do in powerlifting competitions, but it's accepted in strongman. And yes, it allows you to move more weight from point A to point B, but it denatures the deadlift, which is supposed to be a way to overload the hip hinge pattern. By hitching, you pretty much take out the hinge action and turn it into a quarter squat.

Even worse is those who "multi-hitch." They do the hitching action but they lack strength to at least finish the lift smoothly and will give several tugs to the bar, moving it one inch on each tug to finally get the bar up. This is completely worthless "exercise" that is both dangerous and idiotic.

If posting a PR on social media motivates you and your 12 followers, fine. But at least show people that you know how to deadlift. Post videos of heavy deadlifts done with solid form.

Are your workouts working? It can be tough to track muscle gains, and the scale alone falls short. Here are nine ways to track your growth.
Bodybuilding, Tips, Training
Tom MacCormick February 1

It helps the powerlifter squat big weights and the athlete perform better, but what can the box squat do for the bodybuilder? A lot more than you'd think.
Squat, Training
Nate Green August 24

Sumo or conventional? Check out these tips for choosing the best style for your body type.
Tips, Training
Matt Kroc May 26

Give your body a break from traditional squats and deadlifts and smash your wheels with this growth-inducing plan.
Legs, Training
Ben Bruno January 2