At some point, every lifter needs to try the 20-rep squat protocol. Many of us old-timers did it back in the day and saw impressive results in terms of repetition strength and thigh mass, but we also built our mental fortitude on this program.

I will promise you this: After this protocol, you'll never begrudgingly perform a heavy set of lower body training ever again. Sets of 5 and under are hard, but they don't hold a candle to 20-rep squats performed according to the protocol's standards.

Basically, you take your 10RM load and squat it for 20 reps by refusing to rack the bar and continuing to produce reps in a rest-pause fashion. After the first 10 reps or so, just stand there with the bar on your back and rest, get another rep, stand there again, etc. You end up breathing so hard that these have been called "breathing squats" by many lifters.

Seventeen years ago, I increased my 20RM from 135 pounds to 275 pounds over the course of a few months. The set of 275 pounds lasted 9 minutes. Yes, I had the bar on my back for nine whole minutes.

The first ten reps were probably performed one minute, and the remaining ten reps took an additional eight minutes. The typical protocol is 6 weeks long, but I continued with it until I never wanted to perform another 20-rep set of squats again for the rest of my life. (I still haven't.)

Give it a shot.

The proper use of back-off sets, the truth about going to failure, and 5 other rarely discussed habits of great lifters.
Motivation, Powerlifting & Strength, Training
Jesse Irizarry November 23 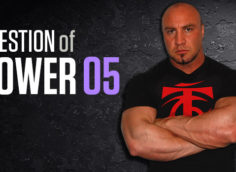 How to make your pecs jacked (not just strong), what bodybuilders and powerlifters can learn from each other, and simplifying fat loss.
Bodybuilding, Chest, Diet Strategy, Question of Power, Training
Paul Carter May 23