During high-intensity training and competition, the need for oxygen naturally increases beyond our capacity to provide it. This leads to near-barbaric levels of "burn" from metabolic byproducts.

Although the scientific community no longer agrees to call this lactic acid, hydrogen ions, or anything too specific, we can agree that it's some form of acidosis. The alkaline properties of baking soda help to reduce the affects of this acidosis allowing us to prolong high levels of power output and decrease the amount of muscle fatigue experienced during practice and competition.

In the literature, there have been several studies that prove the benefits of drinking bicarbonate of soda. One such study conducted by colleagues at the University of Australia and published in the Journal of Applied Physiology placed 16 active women into two groups of eight. One group used a placebo while the other ingested bicarbonate of soda.

The latter group showed marked improvement in their lactate threshold and time to fatigue. The working muscles were better able to buffer and/or neutralize the acid resultant from training.

In another study done at the University of Bedfordshire, researchers studied the effects of bicarbonate of soda on breath-holding time. Holding your breath reduces oxygen saturation in the blood (amount of available oxygen) and causes an increase in blood levels of carbon dioxide (this is the same as training, especially anaerobic training, which also increases blood levels of carbon dioxide because of significantly increased metabolism when compared to being at rest) and decreases blood Ph. The study found that ingestion of the mixture increased breath-hold time by 8.6%.

Another study performed on swimmers at the Academy of Physical Education in Poland showed that using bicarbonate of soda before the 4x50m test trial improved trial times by almost 1.5 seconds and had a significant impact on the resting blood Ph of the competitors.

Those benefits make making soda a great legal performance-enhancer for athletes in any power or endurance-based sport.

Drinking baking soda before training is supposed to reduce the "burn" from intense hypertrophy training. It does, but is that a good thing? Well, it's tricky.

I recently learned from Christian Thibaudeau that sodium bicarbonate can also decrease the production of stem cells and follistatin, making it not so great for inducing a strictly hypertrophic effect. So, for example, you wouldn't be advised to use it with an off-season program designed to pack some extra meat onto your athlete's bones.

On the flip side, Thibaudeau did mention that one study showed less nitrogen excretion in training, which could imply that less muscle damage takes place. So, it might be useful in the weight room with in-season athletes who need to keep their strength and power up, but must avoid muscle soreness to play at their best on game day.

Completely mix half a teaspoon of baking soda and two tablespoons of apple cider vinegar into a glass of filtered water. Soda water can also be used and might even provide an added affect because of the carbonation.

The best exercise isn't the one that hurts the most, but the one that has the greatest benefit compared to its costs.
Bodybuilding, Powerlifting & Strength, Training
Charles Staley September 11
I'm normally somewhat of a bookworm and science geek, although – to blow a little sunshine up my own butt – I have to say, I'm getting better at reading people.
Training
Eric Cressey February 28 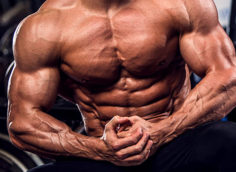