Cardio machines pretty much suck for the purposes of fat loss. It's damn hard to burn anywhere close to 300 calories during a 30-minute stint on any type of indoor exercise machine. You gotta' want it.

I maintain that only soulless human drones, the kind suited for assembly line piecework at a factory, can endure the mind-numbing boredom of peddling, stepping, or striding long enough and hard enough to burn up any significant amount of calories.

You're much better off, weight-loss wise, in saying no to a beer, pushing away that dessert, or even mixing up your tuna salad with a teaspoon of mayo instead of a tablespoon.

I think these machines are much better suited for building "metabolic capacity" so that you won't go into oxygen debt during some future set of deadlifts.

Anyhow, there are always going to be people who rely on cardio machines to lose weight. It's with them in mind that I present the results of a recent study that compared 10 common indoor exercise machines to determine which was best, i.e., which one burns up the most amount of calories.

Surprisingly, at least to me, it was the common treadmill that took the calorie-burning prize.

Researchers cajoled 16 young adults, each presumably comfortable with long stretches of boredom, to participate. Each subject was tested on all of the following 10 machines:

Without going into too much detail, take it from me that the researchers went to great lengths to ensure that each person was permitted to become familiarized with each machine before testing, allowed ample warm-ups, and was tested on only two machines a day to allow ample rest.

They were also instructed on the fine points of RPE, or rate of perceived exertion. Each subject completed 5-minute bouts on each machine at RPE workloads of 11, 13, and 15 on the 6-20 Borg scale. (For sake of comparison, 11 is fairly light; 13 is considered "brisk," and 15 is considered pretty hard but sustainable.)

In other words, the researchers did all the stuff they were supposed to do to ensure that the results had some integrity.

Here's how the calorie-burning over 30 minutes panned out:

Heart rate and oxygen consumption correlated fairly well with the energy expenditure rankings, so there's not much reason to scrutinize those readings.

It makes sense that if you commit yourself to the drudgery of indoor-machine cardio work, you'd want to use the piece of equipment that gives you the greatest return, calorie-wise.

That being said, you need to look at some of the limitations of this study. For one thing, the subjects only exercised for 5 minutes at a time at the three different RPEs (which are subjective anyhow). The researchers then extrapolated what the results, calorie-wise, would look like after 30 minutes.

Extrapolation is generally fine, but it leaves room for all kinds of inaccuracies.

Secondly, some test subjects might have been more familiar with certain pieces of exercise equipment, which may have resulted in lower energy expenditures on the equipment they were most comfortable with.

Thirdly, body anthropometry must surely play a role in how many calories a body expends using a certain piece of equipment. Limb length and size/weight, by logic, has to make a difference.

Case in point, consider the stepmill, which, amazingly, ranked second in total calories expended. It's hard to believe that some waif-like, Ariana Grande type who prances from step to step, alighting on them like a dragonfly skittering across a pond, would burn the same amount of calories as some Marvel Juggernaut-clone who plods along, causing the Earth to shake with each step.

Still, the results of the study are still probably solid enough to provide some guidance to those who regularly expose themselves to the torture of indoor cardio and want to spend their time in the most efficient way.

After training you have a 5-15 minute window of opportunity to greatly accelerate recovery and overall progress. Here's exactly what to do.
It Hurts Fix It, Plazma, Soft-Tissue Techniques, Training
Dr John Rusin May 18 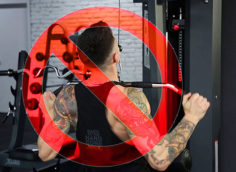 The way most people do pulldowns won't actually hit the lats much. Try this unique variation instead and feel the cramp.
Training
Tom MacCormick October 25

Add some jumps to your training and your body will recruit more muscle fibers when you lift weights. Here's how.
CrossFit, Powerlifting & Strength, Training
Eric Bach April 6