Bench for Pecs, Not to Inflate Your Ego

Bodybuilders should forget about relying so heavily on the standard bench press. The only reason it's still around is ego, ego, ego.

See, the bench press doesn't really isolate the chest. It's more of a team effort between the triceps, delts, pectoralis, biceps brachii, lats, and even quads. And depending on your individual anatomy, all those secondary muscles might be contributing more to the effort than the pecs themselves. Ergo, little or no direct chest stimulation and little or no chest growth.

But, sigh, the bench press allows you to lift a lot of weight. You can put three or more plates on each side and believe right down to your insecure core that the poundage you use is an accurate barometer of your worth as a human being, of your superiority over the next poor bastard who's only got two plates on each side.

If, however, you were to somehow manage to stow that ego away with other childish things, you might still be able to hear the faint whispers of legendary trainer Vince Gironda from many decades ago, who, if I'm channeling his spirit correctly, is saying that any bodybuilder who relies on regular bench presses has his head up his ass.

Instead, Vince recommended that lifters do neck presses, which he affectionately referred to as guillotine presses because of their potential to cut your head off your lovely shoulders.

A guillotine press is simply a bench press where you take a wider-than-shoulder-width grip and lower the bar to your neck. And, if you look briefly at the anatomy involved, you can see that it stimulates the chest muscles better than practically any chest movement.

When you lower the bar to your neck with your elbows flared, it stimulates the pectoral fibers along their lines of axis. You get supreme activation of all the fibers in the upper, middle, and lower portions of the chest muscles. Furthermore, you get less involvement/activation of the anterior delts, which are normally way too involved in the bench press.

Despite the name, the guillotine press can't really cut your head off. That's silly. The worst that could happen is that the bar might get stuck on your neck, which would put undue pressure on the trachea, possibly choking off air and making your eyes all buggy, ultimately causing an increasingly hypoxic state in the brain and leading to unconsciousness and possibly death. But nah, your head wouldn't get chopped off.

The solution to avoiding this predicament, of course, is to use much less weight than you would in a conventional bench press, and to use a spotter. In lieu of a spotter, you could employ a Smith Machine, which, in case of impending muscular failure, provides several opportunities to rack the bar between full extension and your neck.

Guillotine presses can also cause shoulder strain in some lifters because they force the shoulders to act as stabilizers, but the shoulders will eventually adjust and strengthen. However, by again using a Smith machine, the fixed nature of the Smith machine bar will relieve the shoulders of their need to stabilize the movement, hence, no pain (except perhaps some pain from having the shoulders stretched out to an unaccustomed degree).

You can also, if you dare (because it will reduce the amount of weight you can use even further), bring your hands out as wide as the Smith machine allows. This will further eliminate the role of the shoulders (and triceps) and make the Guillotine press as pure a chest movement as physically possible. 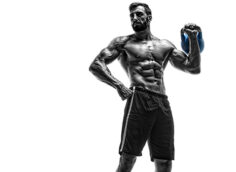 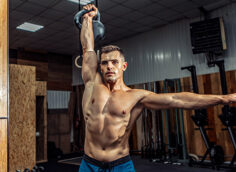