In the case of the bench press, the cue to "spread the bar" is one that's especially misleading for everyday lifters.

Do the Opposite of "Spread the Bar"

Every bodybuilder and recreational lifter wants to hit good numbers on the bench, but they're usually more concerned with building an impressive chest than they are in benching the equivalent of a small Buick.

We all know that the "spread the bar" cue will encourage a tight upper back and maintain stable, upper-back contraction throughout the movement. But for lifters who just prefer to use a narrower benching grip than a traditional powerlifter, or who have longer arms, spreading the bar can start taking away from the emphasis of his efforts.

Consider that the chest muscles travel inwards to the sternum in a nearly horizontal direction. As such, it's more beneficial for bodybuilders to cue themselves to squeeze INWARDS on the bar while pressing, being sure to keep the shoulder blades from remaining pinched together while doing so.

The squeeze-in cue encourages the chest to remain contracted through the entire duration of the lift, which is the same premise behind flyes, the squeeze press, and other max-tension pressing movements. However, for some reason, people lose their minds when the same cue is applied to a barbell bench press.

Squeezing inwards won't make a lifter with a good mind-muscle connection lose his form or become unstable. If anything, he'll improve in both areas due to the constant tension on the target muscles. Also, by way of traction, squeezing inwards will probably centralize the humerus in its socket for a smoother feel overall.

Don't hesitate to use this cue, and if you don't compete in powerlifting competitions, you'll probably be glad you did. 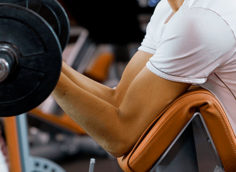 How much time should you spend building versus cutting? Your physique depends on the answer. Check this out.
Bodybuilding, Tips, Training
Tom MacCormick November 15 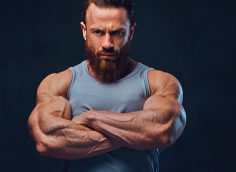