Arthur Jones (1926-2007) was the inventor of Nautilus machines in the 1970s, and MedX strength-training equipment in the 1990s. If you have read any of Jones's one-set-to-failure bodybuilding material, you will probably remember his unique way of painting pictures with words.

The following paragraphs were taken from his early writings – which detailed the proper way to perform a set of barbell curls. Note: When this material was written, Jones recommended two sets of most exercises. Even so, you will quickly get the feel of how Jones applied high-intensity training. 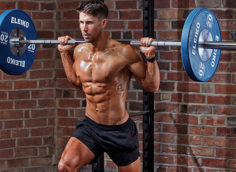 If you're not a fan of reverse lunges it's probably because you're not using these tips.
Training
Gareth Sapstead September 29

Stop jumping into your pull-up. Get strong in the bottom position with this method. Check it out.
Tips, Training
Kelli Keyes & Abby Keyes February 1