Chuck Ahrens is relatively unknown to most modern lifters, but in his time he was considered to have the strongest shoulders and arms in the world. He was so wide he looked unreal. 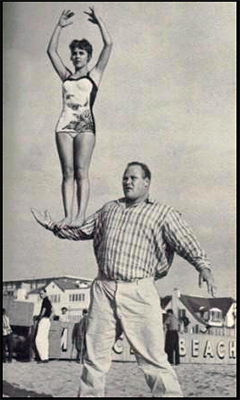 One of his shoulder exercises was very peculiar: he'd do overhead dumbbell presses, but instead of pressing them straight up he'd press them up and away laterally, basically doing a "V" with both arms. He had no choice but to press in this manner because he used special loadable dumbbells that were very long. Pressing them straight up was impossible without the 'bells hitting each other.

What this exercise does is place the shoulders, especially the medial portion of the deltoid, under greater tension as the movement gets completed.

Lower reps or higher reps? It depends on the fiber dominance of the muscle in question. Check out this handy guide.
Tips, Training
Christian Thibaudeau April 12

Do your pecs look like something you'd find at IHOP covered in maple syrup? Then this article is for you.
Bodybuilding, Chest, Training
John Meadows November 22
The Priming Stage
Training
John Berardi, PhD & Chris Shugart November 9