I'm 6'4" with the longest femurs and arms imaginable. I'm an anatomical outlier in the gym and I'm not built like any elite lifter of any discipline (powerlifter, strongman, or weightlifter). Maybe you are too.

In other words, I'm a primo example of how a double bodyweight squat – considered a "strength standard" – is much more demanding for someone who has to travel a much greater distance with many more body compensations to achieve a straight bar path.

That's the reason most titans of CrossFit are under 6 feet and have average lever lengths. Work is the product of force and distance, and both of those factor in huge when you're racing the clock.

This example sounds severe, but it's actually shockingly realistic. With the difference between these demands, who do you think would reach a double bodyweight squat standard first or with less difficulty?

If you're not skeletally built for lifting, you're going to have more frustration reaching generic lifting standards. No strength standard has taken into consideration the anthropometry of the individual, and it's time someone called that out.

Yes, build a strong squat. But if you're tall, don't beat yourself up if it takes you longer to meet one of these supposed strength standards.

No, not three dumbbells, dummy, but an overhead press performed with three different techniques without rest. Check it out.
Bodybuilding, Shoulders, Tips, Training
Tom Morrison March 20
Stretching is a lot like flossing. We know we should do it, we know it's beneficial, but a lot of us don't do it very often or very well.
It Hurts Fix It, Training
Chris Shugart June 7 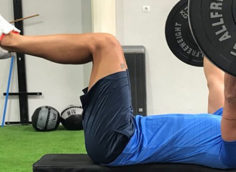 A new study says you should bench with your legs up for maximum muscle fiber recruitment, but are they right?
Training
TC Luoma September 8