"Well, I'll try not to cheat on you," she replies.

Ouch. Try? She'll "try" not to cheat on you? Well that's not very reassuring.

But why? Why did the word "try" cause you anxiety? Well, because you know that "trying" doesn't often lead to succeeding. Think about it. You're invited to an event that you don't want to attend. Your polite response is, "Yeah, I'll try to make it!" which means "There's no way in heck I'm going."

Much like telling others we'll "try" to do something, saying that to ourselves (usually using what's called internal dialog) means that we're very likely not going to do it.

The more scientists and psychologists look into it, the more we learn about establishing patterns in our brains. One thing becomes very clear: the words we use program us to carry out – or not carry out – certain actions. The problem? The "try" software is buggy.

We're being polite when we tell others that we'll try to do something that we know very well we're not going to do. But we're also doing the exact same thing to ourselves. It's a self-comforting mechanism. It makes us feel better. And, of course, it's a big fat lie.

Remember the brain programming thing? Memory studies show that thinking, "I'll try to remember" actually tells your brain that it's okay to forget. The simple way to remember things better is to say "I will remember to..." Where the former phrase acts as a procrastination mechanism, the latter executes the action.

Now we have to apply that to our health, diet, and lifting goals:

"I'll try to avoid junk foods." Ah yes, "try" to avoid them, because junk foods sprout legs at night, sneak into your house, and jump into your mouth. Are you going pick up junk food and knowingly and willingly stuff it in your face or not? Just decide.

"I'm going to try to make it to the gym." Wow, you're not even trying right away, you're GOING to try. Aw, now you feel all content and snuggly inside knowing that, darnit, you're probably maybe kinda going to try... but not right now.

If you want to succeed, eliminate the word "try" from your vocabulary. It's actually very honest and freeing. There are some things you're going to do and some thing you're just not going to do. Two categories, no wishy-washy, self-bullshitting middle ground. Decide, commit, and execute.

Use the Rubber Band Trick 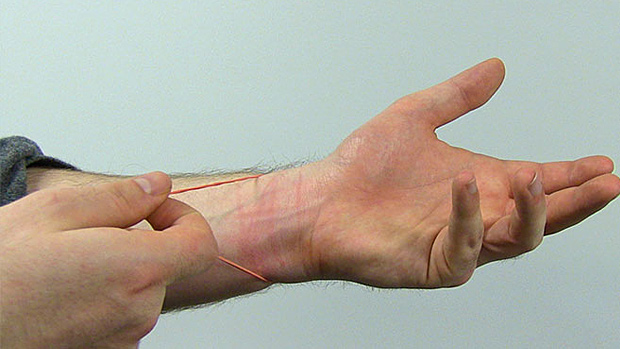 Put a rubber band around your wrist and give it a snap every time you say or think the word "try" in the context of a lifting or diet goal. Then make the choice right then and there. Are you going to do it or not do it? Do that for one week and you'll be amazed at the de-cluttering that'll occur in your mind. You may also be surprised how fast you'll start reaching your physique and performance goals.

A new way to perform muscle and strength-building negatives on the squat, bench press and even the deadlift!
Bodybuilding, Powerlifting & Strength, Training
Joel Seedman, PhD December 23