It's Monday, so it's chest day of course. Bob's about to do a bunch of bench presses. But first, he needs to stretch. Because he learned that from Jane Fonda, or something.

Bob adds weight to the bar, and as it gets heavier he asks someone for a spot. Bob proceeds to do about two good reps, then needs the guy to upright row his barbell for another 8 reps while his feet do some kind of tap dancing routine all over the floor.

But Bob doesn't stop there. He adds more weight, and then asks YOU to spot him because the other guy's shoulders were destroyed after that last set. You reluctantly agree.

Bob gets about half a rep before you too have to begin an upright row workout. Bob then eeks out another 10 "reps" with your help. Bob is feeling strong today, so more weight to the bar must be added. After all, he just did that weight for 10 reps. Eventually Bob works up to a "max" and asks if it was "all him" or not, then tells you he normally does that weight pretty easily and isn't quiet sure why it was so heavy today.

There are lots of Bobs in the gyms these days. They come in and max out every week, or even just on the days they feel strong. Why are men more obsessed with this than women? I'll admit to doing this in my earlier years too. Then one day I woke up and realized what an idiot I was and knocked that shit off and my training became more productive.

Doing maxes in the gym, and I mean TRUE one rep maxes, have no purpose in terms of creating training productivity. It's a demonstration of your strength, but not an actual strengthener. Believe it or not, it doesn't build strength, nor can you base training cycles around it. So I can't figure out what real purpose it serves, especially for all those one-rep max fanatics who don't even compete in powerlifting.

I once did an interview where I said something to the effect of "just because you go into the gym and you're having an amazing day and you squat 650, it doesn't make you a 650 squatter." This was taken completely out of context and everyone missed the point, which is this: If you're setting up training cycles using some sort of periodization, you never take your true one rep max and factor that in. You use a number for your training cycles based off something you can do even on a bad day, or something that would be a very modest PR.

If you're using the former method, I call this an everyday max or EDM. And if you're going to max, this is how you do a "max" in a manner that's productive, and has purpose.

The reason to do this is because you're going to have bad days, and it's important to stack up weeks of productive training that don't cause deep inroads into your recovery. If you factor in your TRUE one rep max, and you're looking at a training cycle of eight to twelve weeks, then there's going to be a point where you start missing the reps you're supposed to hit. Then the upcoming weeks aren't going to be doable and you'll have to reassess your training cycle completely. Does this seem productive?

Truly productive strength training cycles are about building momentum. That means stacking up one productive training cycle after another, and not overreaching until the very end of the training cycle where rest and recovery will allow supercompensation to happen in preparation for competition.

The other problem with maxing is that guys often do it after they're into a few weeks of a productive training cycle, are feeling strong, then decide that somehow it's a good idea to deviate from what's making them strong and max out. What often follows is a strength regression for a few weeks before strength returns to baseline levels. So you basically give yourself a voluntary setback just to brag about your single rep.

Here's a clue for guys that keep doing this: The reason you were feeling strong weeks into a training cycle is because you were training with enough volume, intensity, and frequency, that made strength adaption happen without impeding recovery.

Now you've subjugated yourself to your ego and have thrown the recovery curve straight into the shitter. This is why the dip in strength usually happens before your strength "set point" is reestablished a few weeks later. 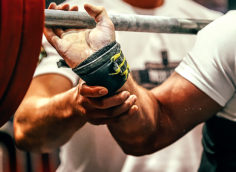 To build strength and muscle, as well as avoid injuries, you must train all six patterns. Does your program include them all?
Bodybuilding, Powerlifting & Strength, Training
Dr John Rusin November 10

You've probably seen the GHR before. Here's how to do it right and how to make it even more effective
Glutes, Tips, Training
Bret Contreras April 17