When you have more mass to carry and longer limbs to mind, your joint integrity might not be as sound as someone with a smaller body. As such, never forsake your ability to achieve full ranges of motion, especially at the hips and shoulders. Try these:

Rockers are a rude awakening to your perception of hip and shoulder extension. I like doing these as filler exercises to other conditioning movements because they keep me mobile while also serving as a great core and posterior-chain burner. Try sets of 8-12 reps.

Assume a starting position with the fingers facing forward and raise the hips until you're in a supine, tabletop position. Look for 90-degree angles at the knees and, ideally, at the shoulder joint too. This will be tough if you're tight.

Squeeze the glutes and aim to raise the ribcage as high as possible as you pull your shoulders back. Hold this position for a one-second count and slowly "swing" your body through your arms until you're in the straight-knee position seen in the video.

Note: I have pretty long arms relative to my torso length, so it's easy for my butt to clear the ground on the swing-through. For lifters with shorter arms, elevate the hands on low platforms or plates.

Ready to pull 600 off the floor? Here’s how one lifter did it and what he learned along the way.
Deadlift, Powerlifting & Strength, Training
Todd Bumgardner & Mike Ranfone January 17 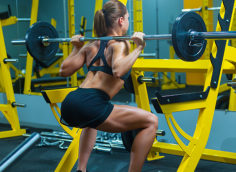 If your idea of conditioning is doing some treadmill "work," then try these high-octane fat-burning finishers.
Conditioning Finishers, Metcon, Training
Rob King February 7

Certain things look good on paper, but most don't pan out. For instance, Eric Cressey thinks wave loading is a bunch of hooey, as are weight gain powders and, believe it or not, the notion that external rotation movements are a cure all.
Training
Eric Cressey December 27