Case in point: The classic bench press "spread the bar apart" cue can be especially misleading for everyday lifters. Most lifters in the gym want to hit respectable numbers in the bench press, but they're equally concerned about the bench press being an effective vehicle to trigger hypertrophy (muscle growth).

You know the "spread the bar" cue will encourage tightness through the upper back to promote a more stable press, but for lifters who have longer arms, or just prefer to use a narrower grip than most powerlifters, the spread-the-bar cue can end up detracting from your efforts.

Based on what we learned about the chest fibers' direction, it makes more sense to squeeze inwards on the bar to intensify the contraction of the pec fibers. Of course, it goes without saying that you should still keep your shoulder blades pinched back on the bench.

In truth, squeezing inwards won't kill your mind-muscle connection or your technique. If anything, it'll improve it. And, by way of traction, it'll centralize the humerus in its socket for a much smoother overall feel. If you're not a powerlifter, "squeeze in" is a cue that's definitely worth trying. 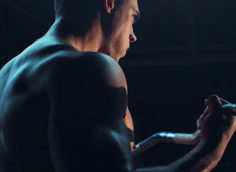 Past the newbie stage, it's tough to improve every muscle group or lift at the same time. Here are some simple rules for specialization programs.
Bodybuilding, Tips, Training
Charles Staley November 20

Maybe it's the cost, maybe you got hurt, or maybe you just want to specialize. Here's how to move on to something that better fits your needs.
CrossFit, Metcon, Training
Dan Blewett November 16

Nobody cares about injuries (boring!) until they get one. That's too bad, because sooner or later your knee, shoulder, hip, or back is going to start barking like a coonhound on the hunt. Even babes aren't immune.
It Hurts Fix It, Training
Nate Green October 18