If you've hit a wall in growth or strength, then it's time to rethink your eccentric execution for your movements. The negative/lowering portion of the rep holds a lot more potential for growth than the concentric or lifting portion. But that's not the only benefit to using slow and controlled eccentrics.

Now, the reason a lot of people don't like using slower negatives is because initially they will be forced to reduce load. But if you stick with it, in a few weeks you'll find that you're moving the weights you did before, but now you're doing so with a lot more time under tension. This means more growth. So be patient with it. Here's what this can look like:

More growth isn't the only upside to using slower eccentrics. If you've ever done a set of deadlifts and felt like you weren't dialed in mechanically, then slower eccentrics is a great way to fix this.

When you use a controlled eccentric on virtually any exercise you'll naturally move towards a better mechanical position and begin the next rep with it. So if a lift feels a bit off from rep to rep, slow down the negative and it'll give you some feedback as to proper resistance path.

Slow, controlled negatives force you to put the ego aside. They'll help you get focused on making the muscle work. And they'll help you clean things up in your movement patterning. If you need a boost in growth or strength or technical correction, then simply slow it down. 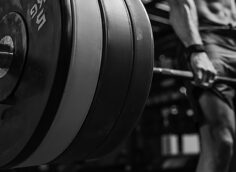 What is it about Canada and great strength coaches? For some unknown reason, the Great White North produces some of the world's best coaches and trainers, with Charles Poliquin, Christian Thibaudeau, and Charlie Francis being just a few examples. Now, another young Canadian is beginning to climb into the ranks of the elite: John Paul Catanzaro.
Training
John Paul Catanzaro January 6

A new exercise is mentally stimulating. It turns your brain on, excites the nervous system and breaks you out of the training blahs. Try these out.
Bodybuilding, Powerlifting & Strength, Training
Chris Shugart & TC Luoma April 30

And it'll add size to your upper back too. Check it out.
Tips, Training
Eric Bach February 15