The Sad Decline of Decline Benches

It's becoming increasingly rare to see decline benches in the gym. Sure, we get that. People sometimes assume the decline bench is non-essential, or redundant. They believe that while the flat bench works the lower, or sternal part of the pec muscles, the decline also works the same part, albeit at a different angle and to a lesser degree.

Besides, the decline bench is uncomfortable, what with all that blood flowing to the head, and women often don't like it because they risk flashing all that gravity-induced neathage and buttage and whatnot. If decline benches do get used, it's usually for some sort of bastardized sit-up or crunch where people use entirely too much of their lower-back erectors.

That's too bad, because an all-but-forgotten 20-year old study shows that the decline is, surprisingly, as good or maybe better than the incline bench for building the upper, or clavicular part, of the pectoralis major, and is better overall for the sternal part of the chest than the incline.

Do They Do What You Think They Do?

To come to this conclusion, they recruited 15 seasoned lifters and wired them up while they did inclines and declines in the lab. The electrical activity reflected during exercise told the researchers everything they needed to know.

In short, the effect on the upper pecs was pretty much a wash. However, when it came to activating the lower part of the chest muscle (the main body of the pec), the decline blew away the incline.

So, contrary to what most lifters assume, the angle of the bench press doesn't much affect the upper pectoral muscles, but the angle definitely affects the lower pec muscles.

Based on this study, the decline bench press is superior to the incline when it comes to working the whole pec.

Additionally, the decline is equal, or perhaps a tad superior (when you take into consideration the greater stimulation on the eccentric part of the movement) to building the upper part of the pec.

That doesn't mean you should ditch the incline press. It only means that you should pull the decline bench out of the gym dustbin and not only put it back into your routine, but give it just as much respect as the incline. 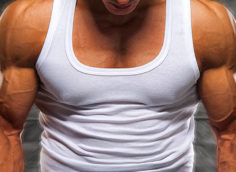 You're a big dude with a barrel chest. Then why can that little guy who looks like a cast member of the Wizard of Oz remake outbench you?
Bodybuilding, Training
Matt Brzycki November 16