It's leg day and you have a decision to make. You're really not feeling it today. You take a look at your workout plan and groan. What do you do?

As a dedicated lifter, you're not going to miss a scheduled workout. So should you stick to the program you've been following and grind through it? Or should you mix things up, choose some different leg exercises, and give it your best?

Which is best? Here's what one study found.

Both groups lifted weights three times a week for 9 weeks. Each session included an exercise for legs, chest, back, biceps, shoulders, and triceps. There were three exercises available for each body part.

In the auto-regulatory exercise selection group, the subjects were allowed to choose which one of the three exercises they would do each day, and therefore could use the same exercise for the same body part multiple times a week. While sets and reps were equal across each group, the volume load was not equivalent.

There was a huge increase in volume load in the auto-regulatory group. The 1RM strength gains in the squat and bench press between the two groups lacked any significant differences. Average increase in lean body mass was greater in the auto-regulatory group although it wasn't significant. RPE (rate of perceived exertion) between the two groups were also similar.

With similar RPE between groups, but a 20% increase in volume load in the auto-regulatory group, it seems that being able to choose exercises in each workout has a large effect on motivation (or some aspect of psychology).

Allow your mental state and physiological readiness dictate the exercises you choose during a workout. The strength gains aren't significantly different from having a structured exercise selection plan. And although not significant, the average increase in lean body mass in the auto-regulatory group was 1.60 kg while the average increase in the fixed exercise group was .98 kg.

So, stay consistent, but don't be afraid to mix up the exercises. 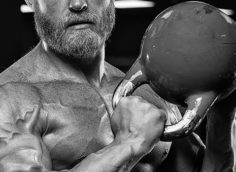 Whether you're a fighter, a strength athlete, or a law enforcement officer, these two moves will build real-world strength.
Training
Gareth Sapstead April 29

Knowledge is power, but knowledge can also be limiting. Real progress occurs when you harness the power of the belief effect.
Motivation, Training
Tim Henriques August 17