Most lifters assume the knee is highly injurious. There is some truth to this joint being more vulnerable than others due to its anatomical properties and orientation relative to the ankle and hip complexes. But there's more to the story.

First, the structure of the knee joint is very immobile by nature. It's a hinge joint with only two true degrees of freedom, meaning it only moves into flexion and extension. Less relative motion from the knee in combination with poor gross movement through joints that are supposed to be highly mobile put undue stress over non-contractile tissues like ligaments and cartilage.

This kink in the kinetic chain is most notable for lifters in quad-dominant movements like squat and lunge variations. While global instability of the knee joint may be a chicken-or-the-egg argument with the co-morbid factors like stiff and immobile joints above and below the level of the knee, many chronic natured injuries also become symptomatic over the front side of the knee at the patella.

Increased tone and tightness through the quads can increase compressional and shear forces through the kneecap, causing increased rates of patella-femoral friction and irritation.

Functionally shortened and stiff quads in combination with poor patellar movement is exacerbated with poor squat mechanics such as anteriorly drifting knees and valgus drop, and also in lunge-type movements when the knee joint is forced into terminal flexion.

If this sounds like a pretty big problem that most lifters need to address, it is. Pay attention, this simple cue below can clean up your movement and give those pissed-off knees just enough of a break to recover for good.

Pay attention to knee tracking. There are loads of different lower body movements that involve both the squat and lunge variations. Though each movement is unique and has many important factors to execute crisp, clean reps, starting off with an appreciation for where your knee should be positioned relative to your foot can clean up even the most pitiful form pretty quickly.

When reaching the bottom position for both the squat and lunge, the patella should be tracking over the lateral aspect of the foot. Some coaches teach these movements with the knee directly over the midline of the foot, but I've seen this cue fall apart in terms of mechanics of motion.

By targeting the midline of your kneecap to track directly over your pinkie toe, the glutes and hamstrings are able to be targeted with just enough torque and spiral tension loading that the unwanted valgus collapse and anterior knee translation is minimized almost automatically. 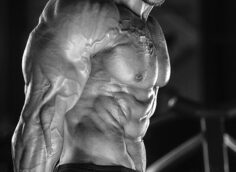 This full-body, three-days-per-week routine got The Oak started in bodybuilding. Check it out.
Bodybuilding, Tips, Training
Bradley Joe Kelly June 3

Break out of your training rut and build some new biceps mass with the drag curl! It's not easy, you'll look like a gimp doing it, and you'll have to use sissy resistance. What more could you ask for in an exercise?
Training
T Nation July 27

Looks odd, but it's brutal on the quads due to the constant tension, even at the top of the rep.
Exercise Coaching, Legs, Squat, Tips
Ben Bruno August 23