Stay Out of Valgus

While there's been a lot of debate about shoving the knees too far out, most agree that pushing them too much inwards isn't a good thing, at least if you want to keep your knees healthy. This inwards-knee thing leads to what's called a "valgus position" and leaves the knee joint vulnerable, especially under a heavy squat.

This is one of the most common squat problems, and while many point to weakness in the quads as the reason, it's not necessarily so. When you look at the attachment of the quads and how they work, you see they have little effect on how the knees move from side to side and in rotation.

Most of the time, the knees moving inwards have to do with either weak hips, and/or lack of proper technical understanding of what's supposed to happen during a squat movement. Furthermore, when you see knee problems, you almost certainly will detect hip problems as well.

How to Fix It

To remedy this, train with some bands around the knees to make it easier to activate the hips during the squat.

You can also do banded walks or hip abduction exercises. 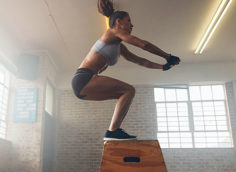 Bands, chains, boxes, agility drills. They have their place, but there's some really bad info out there. Here's what you need to know.
Athletic Performance, Powerlifting & Strength, Tips, Training
TJ Kuster December 15

Most of you just have an ab, as in one non-distinct blobby area between your pecs and your naughty parts. Here's how to make your singular ab into plural abs.
Abs, Training
T Nation August 5