The plank started out with noble intentions. It quickly became a movement (or lack thereof) that anyone could do with little to no mastery. Just put your elbows on the ground, straighten out, and hold it for 5 minutes at a time! And wow, in a matter of no time you would have a rock solid core that would save you from lower back pain and injury... Uh, not so fast.

The primary problem with the traditional plank is the lack of deep core activation over an extended period of time. Traditional planks are progressed by increasing the time of the hold, along with increasing the external load placed on the body. Extended sets can cause postural dysfunction and chronic anterior pelvic ligament trauma.

The core wasn't meant to fire for extended periods of time in isolation. Rather, the deep and superficial muscles of the pillar need to have the ability to fire with maximal force repeatedly over time.

It's time to throw away the traditional plank and upgrade them with a version that actually involves effort.

After getting bored of bodybuilding, one lifter transitioned into a highly-conditioned athlete. Here’s what he learned along the way.
Bodybuilding, Training
Jackson Yee October 20

What's the best form for push-ups? Elbows close or elbows flared? Neither really. Instead, make an arrow. Here's how and why.
Exercise Coaching, Tips
Mike Robertson February 13
As bodybuilders and chemical daredevils, we augment this and we augment that. We take steroids. We take prohormones.
Training
TC Luoma September 25 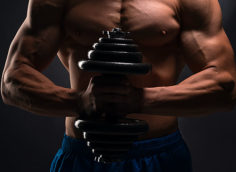