I used to do only paused reps because I thought touch-and-go was "cheating." After all, it's a DEAD-lift, implying you should start each rep from a dead stop, right?

I also used to think paused reps were safer because with touch-and-go reps there's the potential for form to break down as the set goes on, which usually manifests in people failing to get their hips down and "stiff legging" reps later in the set, something that can get dangerous with heavy loads. With paused reps, you can theoretically reset between reps to keep that from happening.

But that's not what usually happens. Instead, you'll often see that the first rep in a set of deadlifts is the worst, when people are trying to overcome inertia and break the bar off the floor. So when you're doing paused reps, there's more "first reps," so to speak, and you'll see form deteriorate with paused reps as fatigue sets in. The higher the reps, the uglier it gets.

So here's what I do now. With my lower-rep sets (under 5), I'll use paused reps and reset my form on each rep to ensure that my form stays tight and I'm not relying on momentum to break the bar off the floor.

With higher reps, though, I'll do touch-and-go, but I make a conscious effort to keep my hips down and my form tight. My back has felt much better doing it this way.

Bear in mind that I do most of my pulling with the trap bar, which lends itself better to pulling for reps.

A Kiss, Not a Bounce

It's also important to note that touch-and-go doesn't give you license to free-fall the weight and aggressively bounce it off the floor. You don't want to lower it really slowly, either, as that's dangerous in its own right, but you do want to be in control of the weight.

Think of it as a "kiss" more than a bounce. Realistically, when you're dealing with heavy-ass weight, that kiss may be a bit more aggressive, more like making out with heavy petting, or sliding into first base.

Bust through plateaus and challenge your muscles in new ways with this killer list of upper body exercises.
Bodybuilding, Training
Lee Boyce July 12 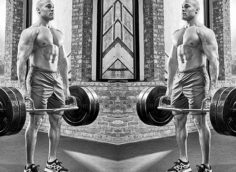 Here’s why everyone should consistently do lifts at or above 90% of their 1RM.
Powerlifting & Strength, Training
Tony Gentilcore October 31

Ramp up this staple exercise by adding a short pause at the bottom of each rep, then explode from that dead-stop position. Do 6-10 reps, 2-5 sets.
Exercise Coaching, Legs, Tips
Dr John Rusin July 24