Complexes are blocks of exercises performed back to back. The Soviets used originally used two exercises in their complexes – one strength-exercise and one power/explosive exercise to cover both extremes of the strength curve.

With star complexes, instead of training only two points on the force-velocity curve, we train five points. (Note: This is part of my 6 Weeks to Superhero program.) Each complex uses five exercises of the same movement pattern. The exercises are performed one after the other, starting with a heavy/slow movement first. Each subsequent exercise will be lighter in resistance than the previous one, but the rep speed will be faster. 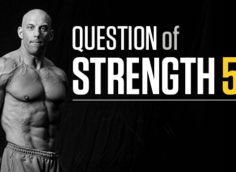 It looks crazy, but it'll build your delts and overhead strength like nothing else.
Tips, Training
Joel Seedman, PhD January 30