All you need are the big compound lifts to build muscle, right? Not so fast. Science tells us that this is a myth. Muscle size requires more than just the compound lifts. You need to isolate certain muscles to get them to grow.

For instance, different parts of the hamstring complex can be regionally targeted through exercise selection. This falsifies the common belief that just sticking to the big lifts will give you a fully comprehensive training stimulus for building muscle.

Researchers investigated the muscle activity of the hamstrings during the leg curl, good morning, glute-ham raise, and Romanian deadlift (RDL) and found that hamstring activity was maximized in the RDL and glute-ham raise.

Their results were confirmed in another study, which concluded that people trying to maximize the involvement of the hams should consider focusing on both the glute-ham raise and RDL (2).

And this goes for all muscle groups. Isolation exercises used on the same area (quads, biceps, glutes, delts) can have unique training benefits and impact muscle growth differently. 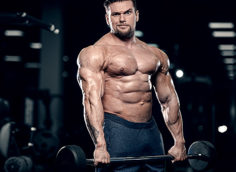 Strong and muscular? Great! Now it's time to ramp up your ability to do shit outside of the gym. Here's how to unlock your real-world strength.
Training
Chris Peil January 8

Because nothing says "I am strong" quite like a monstrous set of traps and a beer keg for a neck.
Powerlifting & Strength, Training
Jim Wendler September 28