Generally, if you're a big dude that can crank out 4-6 plus full range one-arm push-ups, you're a stud. For smaller guys, you've got to do at least 7-10 to get your man card.

Although the one-arm pus- up isn't performed from a standing position, it still heavily involves the core, hips, and lower body. When performing one-armed push-ups, you're promoting unilateral strength, which builds better left/right side muscle balance and brings in more core activation.

But you're also training the "serape effect," which is the force production relationship between your shoulder and opposite hip (through the torso) that's responsible for actions like running, throwing, punching, etc.

Believe it or not, a couple workouts a week at a regular gym would make good CrossFit athletes even better. Here's why.
CrossFit, Metcon, Tips, Training
Jason Brown January 6 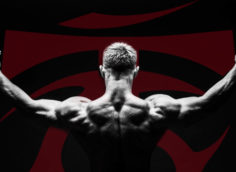 Haven't nailed a muscle-up yet? Use this variation to work your way up and get a feel for it.
CrossFit, Exercise Coaching, Tips
Drew Murphy December 6