Since you're looking to target and improve ankle dorsiflexion range of motion along with alleviating the all too common front sided ankle "pinch" when reaching the end range, this strategy will improve both the quality and quantity of this range.

The main ankle joint associated with dorsiflexion is referred to as the talo-crural joint and is comprised of a bone called the talus coming into direct contact with the crural joint. It's formed by the contact between portions of the tibia and fibula creating a joint space.

That's why this strategy will target the mobilization of the talus with dynamic action of the crural joint sliding on top of it.

The most popular way to mobilize the ankle joint is by using a band strapped around the front side of the ankle and moving the ankle into repeated dorsiflexion. But a resistance band can't manipulate anatomical structures such as joint capsules, ligaments, tendons and fascial sheath.

That's why it may be better to skip the band and get your hands in contact with the talus to manually mobilize this joint moving into dorsiflexion just the way a rehab doctor would manipulate an ankle on the therapy table.

Finish off your workout with this series of exercises and get shredded fast.
Exercise Coaching, Fat Loss Training, Tips
TC Luoma April 30 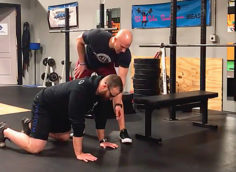 Three days of serious lifting per week and four crucial exercises will turn you into a warrior. Here’s the plan.
Powerlifting & Strength, Training
Dan John December 11
Here's a nasty little exercise we picked up from a couple of competitive arm wrestlers.
Training
T Nation October 5