The cable pull-through is one of the best exercises for learning and mastering hip hinge mechanics. The load vectors match the anatomical function of how the glutes activate.

Rather than loading the hips axially with vertical forces, the pull-through relies on horizontal forces through anterioposterior loading, which matches the force vectors of how the glutes actually function. As a result of working directly against forces that want to flex your hips, this pulls the body into ideal hip hinge mechanics. In addition, this is one of the few hip hinge movements that involve significant tension in both the stretched and fully-contracted positions.

First, instead of placing the cable pulley at the lowest notch, elevate the setting to approximately a foot above the ground. By elevating the setting so that the cable is about parallel to the floor during the exercise, it eliminates vertical forces and emphasizes horizontal loading vectors, all of which further exaggerates hip and glute activity.

Second, because the pull-through is so effective at teaching proper hip hinge mechanics, incorporating an eccentric isometric at the bottom, as well as an additional pause in the top, will do wonders for reinforcing ideal hip flexion and hip extension mechanics.

Want to recruit as many chest fibers as possible? Yes, you do. Add this to the end of your next chest workout.
Chest, Tips, Training
Joel Seedman, PhD December 4 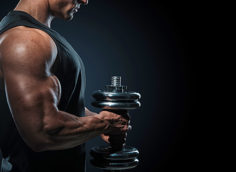