The finisher below was designed to optimize breathing in a stressed state. This is great for fighters, combat athletes, and military personnel. It'll teach your body how to respond in the absence of oxygen so that you can keep your composure and perform at your highest levels. Oh, it'll also burn body fat.

You'll pair an explosive movement with a plank. The kettlebell swing serves as a perfect choice for power, endurance and time-based sets. With proper execution, your heart rate will be elevated and your oxygen demands will increase.

These are paired with planks because abdominal weakness provokes a poor breathing pattern and diaphragm dysfunction. This combination will allow us to train the bracing of the abs while practicing optimal respiration. The plank will demand the respiratory muscles to work simultaneously with the transverse abdominus, external and internal obliques, and rectus abdominis. Instead of holding the plank for time, you'll count each breath in and out as a repetition.

Perform 20 swings and without any rest, drop into a plank position. Perform a hard-style plank for 10 deep breaths. Repeat this for 5 to 10 rounds. To perform the hard-style plank, do the following:

Did you design your own workout plan? Well it's probably missing a few things. Here's how to kill your weaknesses, fix imbalances, and beef up those chicken legs.
Powerlifting & Strength, Training
Tony Gentilcore May 31 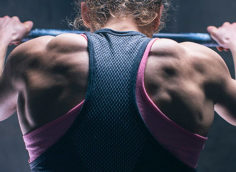 To build a topographic back, you need more than lat exercises. Here's what you're missing plus two exercises to target those muscles.
Training
Calvin Huynh August 9

Do a split squat, then only come about three-fourths of the way up. Hold that position for 3 seconds before lowering. Great for the glute medius and minimus.
Exercise Coaching, Glutes, Tips
Paul Carter March 10
Over the past year or so, I've been swamped with requests from readers who want a program that focuses solely on maximal-strength development. What I'm referring to is a maximal-strength focused program that doesn't induce bodyweight from hypetrophy.
Training
Chad Waterbury August 10