Intensity and effort are not the same in the strength and conditioning world. People usually assume that intensity is the amount of effort put into a workout or an exercise. Or they assume intensity is how hard the workout is to complete. Nope, not in the strength training field at least.

Here's a quick breakdown of what each word means when talking about resistance training:

Effort is how hard any physical work feels, which is independent of load. Consider these two scenarios:

The point being, both will feel like a lot of effort because you're going to expend a lot of energy to complete the set in either case. The difference is that the sets of 3 are high intensity (about 90% of 1RM), while the sets of 15 are lower intensity by comparison (closer to 60% 1RM).

Effort can also be quantified by using the RPE scale. This is used to determine how hard a set felt or how much effort you had to put into it.

There are a few versions of the scale but the easiest is the scale of 1-10. One being the least amount of effort and ten feeling like you're fighting for your life throughout the set.

Let's say that rep count was 15 reps to failure. If you perform 5 reps at 60% 1RM you're clearly not putting in as much effort as the set to failure, but the intensity is the same because you're using the same weight (60% of 1RM).

There are more simple scales like "easy, medium, and hard." Depending on your goal it might only be important to note when you've taken a set to failure. You've clearly hit a max effort then.

This is a great exercise that builds you delts while also protecting joint integrity. The cable is attached at the bottom of the handle, so you'll be pushing up, not pulling down.
Bodybuilding, Exercise Coaching, Shoulders, Tips
David Otey November 4

Train each of four primary lifting patterns every workout, then choose two optional exercises. Simple and effective. Here's how to set it up.
Bodybuilding, Powerlifting & Strength, Training
Charles Staley October 5 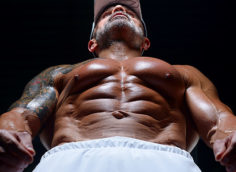