Do This: Maximize hip flexion with a neutral spine.

If you're trying to use the squat as an actual booty builder, you'll want to do these things...

Let's address these a bit to make this picture clearer:

Effectively loading the glutes in a squat isn't about how deep you're squatting. It's about getting maximal hip flexion while avoiding posterior pelvic tilt.

If posterior pelvic tilt happens, then despite your coach telling you it's not a big deal, you just lost tension in the glutes and distributed tension onto the lumbar spine and erectors. Does that sound like a good idea?

When your focus is on the greatest amount of hip flexion, you will by default reduce the degree of knee flexion, which is more of a quad bias. Now we're loading the glutes more effectively, and we're not using shitty cues like "corkscrew the feet" which does nothing to activate or load them.

No, it doesn't. It means to focus on a deeper hinge in the squat, and only to the point where you don't go into posterior pelvic tilt at the bottom, while keeping a neutral spine.

Some people may lean a little more forward than others simply due to their levers. And most certainly, it's going to create a longer lever arm from the barbell to the hips, but that's also something we want as well. Because now the hips have to work harder against the resistance, meaning there's more tension on them, meaning they're more mechanically loaded. This leads to more growth.

To maximize hip flexion and create a longer lever arm from the weight to the hips, you'll probably have to "push the knees out" abducting the hips. This will allow your greatest degree of hip flexion in the descent of the squat, and should naturally put the bar further away from the hips.

This means you'll need to point your toes out as well. How much? You'll want your knees to track over them so that when you push them out, they're in line with your feet throughout the entire movement.

Once you get this down, simply avoid going so deep that you find yourself going into posterior pelvic tilt. If you're nailing the above, that shouldn't actually happen. And now you can actually use the squat as a pretty good booty builder.

Not That: "Screw your feet into the floor."

A fairly common cue from coaches to get more glute activation with squats is to think about corkscrewing your feet into the floor during the concentric. Why? Because the glutes do maximally contract and shorten when there's external hip rotation. But only when the foot is free to move, like in stride mechanics.

Yeah, stride mechanics. Like running. Not when your feet are permanently fixed to the floor in a closed-chain movement.

You can't just use coloring book anatomy here and say "the glute maximus is responsible for external hip rotation" and leave it at that. Context of movement matters.

When your feet are locked into position, like in a squat, deadlift, or hip thrust, corkscrewing the feet does not help to further shorten the glutes. And that strong contraction you think you’re feeling in the glutes? It's simply the deep external rotators of the femur, like the piriformis and a bunch of others that sound like names from Star Trek.

"But when I corkscrew like that I swear I feel my glutes!"

I'm sure it does feel like your glutes since you're creating this massive amount of torque at the hip joint by trying to rotate the feet out isometrically against the immovable floor. But it's not your glutes you're feeling contract. It's those deep internal hip rotators I mentioned above. 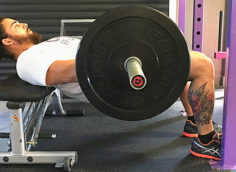 It's one of the best exercises for pure glute gains and posterior strength. Here's how to make it even better.
Glutes, Tips, Training
Lee Boyce May 31

Q & A with one of the world's premier strength coaches.
Bodybuilding, Powerlifting & Strength, Question of Strength, Training
Charles Poliquin January 21 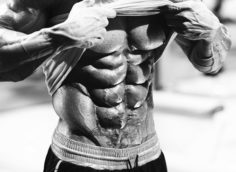