The internet is riddled with box jump fail videos. Instead of watching those videos and learning from the mistakes of others, lots of people take it as a challenge to try it themselves.

Basically, it's the gym culture's version of Tide Pod eating challenges. Gym fail videos aren't just for entertainment, they're also an educational tool in what not to do. The only thing smarter than learning from your own mistakes is learning from the mistakes of others.

High box jumps get misused when the emphasis is on the height of the box instead of the height of actual jump. Sounds weird, but here's why that is:

Let's say you're standing next to a high box platform that's the same height as your waist. Now pick up one leg off the ground and flex your hip as high as you possibly can. The distance between the bottom of your foot and the top of the box is the actual height you'd have to jump in order to get on top of that box. The rest comes from hip flexion.

Trying to increase vertical jump height? That will require a powerful and explosive hip extension action, instead of a hip flexion action, which means you actually want to limit the amount of hip flexion involved in landing on top of the box.

If you do this, you won't land on top of the box in that super-low crouched position we see during high box jumps. Instead, you want to find the highest box height that you're able to land on, but with your knees and hips only bent around 30 degrees. With this method you'll get all the good stuff from the exercise and you'll be far less likely to become the star of the next high-box fail video.

Of course, you won't be able to use as high of a box if you're limiting the amount of hip flexion involved in the movement, which may be a blow to your ego. But there's a big difference between what determines smart and effective training and what makes for cool social media material. 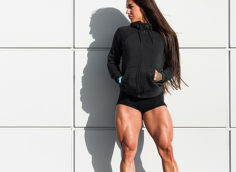 Build massive quads (or die trying) with 40 reps of this exercise. Check it out.
Training
Linden Ellefson February 10

Make the most of your gains by training like an athlete. Build muscle that performs as good as it looks. Here's how.
Bodybuilding, Powerlifting & Strength, Training
Eric Bach August 17

If squatting causes pain in your low back, knees, or shoulders, try one of these pain-free exercises that'll still get you big and strong.
Bodybuilding, It Hurts Fix It, Powerlifting & Strength, Squat, Training
Eirik Sandvik February 20

The pistol squat requires mobility, strength, and balance. If you're not there yet, try the box squat version. Progress by using a lower box.
CrossFit, Exercise Coaching, Legs, Squat, Tips
TJ Kuster October 18