Need to improve your chest development? Here's what to do... and what not to do.

Do This: Allow the shoulders to rotate around the ribcage.

It's the job of the anterior serratus to help pull the shoulders forward. Yes, "protraction" is usually the term tossed out, but in this case we're just wanting them to rotate around the rib cage so that the pecs can get fully shortened. It's the shortening of the serratus that actually hugs the shoulders in close to the rib cage, creating stability for the shoulders.

The scapula and humerus work in concert, and your mind shouldn't be on trying to manipulate scapula movement during chest pressing. It should be on getting maximal output from your pecs.

That means your shoulders should roll around naturally (not into protraction) as they were designed to do when you're trying to get your pecs to function. This is the way your body was designed to move. You're not smarter than your anatomy.

Don't "Lock It Down"

The "lock it down" advice is usually in reference to locking a joint down during an exercise to facilitate either more isolation of a muscle, or (theoretically) to create more stability for a joint.

In the case of chest pressing, or chest exercises in general, locking the scapula down into retraction is what's most common here. And doing this doesn't create more output by the pecs, or more stability for the shoulders.

In fact, locking your scapula down into retraction and holding it there actually keeps the pecs from maximally contracting. It creates a less stable joint from which to press.

When you hold the scapula in retraction as you press, it keeps the anterior serratus from being able to do its job and keeps the pecs from fully shortening. You're not actually getting the pecs to work maximally, and you're not actually creating the stability that powerlifting junkies say you are.

I mean, does powerlifting seem like the bastion of great shoulder and pec health to you?

The mechanics preached in the powerlifting bench press (pack the shoulders, hold them there) is done to reduce the range of motion so that the lifter can move the greatest amount of weight. That's it.

It's not safer or more stable. It does not maximally work the pecs. In fact, it doesn't work the pecs at all. I dare you to try and get a maximal pec contraction while holding your shoulders in retraction the whole time. You literally won't be able to do it. It's not my opinion, it's anatomical fact.

This advanced exercise will build explosive power from the ground up. Check it out.
Tips, Training
Wil Fleming September 27

Bench heavy even if your lower back is acting up. Just use an ab mat to support the natural curve of your spine.
Bench Press, Exercise Coaching, Tips
CJ McFarland September 7 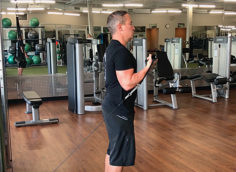