"A commercial gym is better than a home gym because you have more equipment options."

I hear that often when I suggest everyone should invest in a home gym. Objectively, it's true that a commercial gym will have more options than even the best equipped home gym. And while that's seductive, is it really better?

I will concede that once in a while, it's nice to have a machine that allows you to isolate a certain muscle or give you a mental break from hard work on the barbell. But in many cases, having more options can actually do more harm than good.

First, a lot of people shy away from honest work on the big basic barbell and dumbbell lifts. These are not only muscle and strength-building exercises, but also movements that help your capacity to move and use your body properly.

To become a master of the primary movement patterns (squat, hip hinge, press, pull, lunge, and carry), the most important pieces of equipment are a barbell, weights, and dumbbells.

"Yeah, but a commercial gym has those too."

True. But the reality – and this comes from 25 years spent in gyms around the world – is that when provided with "easier" options, most people will replace a large part of the barbell exercises with machine work. And if you're honest with yourself, you tend to do that more often than you care to admit.

One of the biggest gyms in the world is in Montreal, and I've trained there more than a few times. And while it's super impressive – literally every machine ever invented is in there – I could never get a great workout in.

Too many options can create confusion and make it hard to stick to your program. There's already so much conflicting information floating around, making your workout choices harder. We don't need even more confusion.

Listen, you don't need fancy machines to get great results. In the '50s and '60s, before steroids were widely used, most of the training was done with free weights. And these guys built more muscle naturally than the true natural trainees of today. And they were a lot stronger too!

I've also worked in a few high-performance centers and most of them were built around a free-weight model. Normally, a leg curl and pulley station were the only machines we had. And I guarantee that the clients there got a lot more results than those training in the fanciest facilities.

I'll use a golf example. Ball-striking legend, Moe Norman, once said that he envied those who were still trying to figure out the best way to swing the club. Why? Because experimenting and tweaking is the most fun and exhilarating thing you can do when training.

The same thing is true with lifting. Learning to make small modifications to get a better response and improve your gains is the best part of training. At least for someone who's serious about building muscle. Look at the best bodybuilding trainers. They're geniuses at making exercise adjustments to milk out every drop of stimulation they can get. Vince Gironda, Charles Glass, and John Meadows are great examples of this. Obviously, machines take that part out of the equation.

If you have fewer options, you're forced to learn how to optimize every exercise you do. You become more intellectually involved in your training. You learn how your body works and how to get the most out of it.

Again, it's true that big commercial gyms also have free weights. But in those gyms, how many people are doing these?

Not that many. And a good part of them are doing them half-assed.

It's easier to just do leg curls, leg presses, the hack squat machine, lat pulldowns, and Smith machine shoulder presses. I'm not saying these don't work, but they're inferior in many regards. And they're certainly not necessary to reach your genetic potential.

Recruit more muscle, wake up your nervous system, and get more athletic. Squat jumps bridge the gap between jumping in sport and squatting in the gym.
Exercise Coaching, Tips
Eric Bach April 6

Do you tuck your tail when you squat? Not good. Here’s how to fix it.
It Hurts Fix It, Powerlifting & Strength, Squat, Tips, Training
Tom Morrison February 13

Everything you ever wanted to know about advanced periodization for strength training.
Bodybuilding, Powerlifting & Strength, Training
Dave Tate November 3 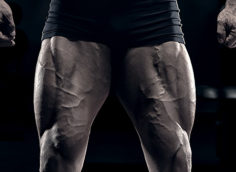 Nail your quads and hammies with this little-known squat variation. Here are two ways to do it.
Training
Lee Boyce March 8