Stick to the Basics or Seek Novelty?

As Coach Dan John says, everything works, but only for so long. As important as it is for beginners to stick to strength and master basic movement patterns, there comes a time when everyone needs to make a change in their training.

For fat loss, the most effective exercises are often the exercises you're least efficient at. In other words, whatever sucks the most will generally yield better results.

But how about building strength and muscle? There's a fine line between program hopping and making subtle changes to your technique to prevent overuse and create a new stimulus. If you're hitting a plateau in your training, try tweaking your stance, grip, or tempo of your lifts every few weeks. This is enough to change the neural recruitment patterns of your lifts for a "new" stimulus without starting a new program.

Consider a daily undulated periodization (DUP) approach. One such example was popularized by Charles Poliquin when he theorized that strength training programs lose their efficiency after two weeks. He supported two-week cycles of a training block while alternating between volume and strength blocks.

Poliquin pointed out that alternating volume/strength blocks eliminates the physiological and psychological stagnation caused by an overemphasized specialization on volume or intensity.

While keeping your exercises the same, you could simply alternate intensity and your set-rep schemes for a novel stimulus.

This fluctuating intensity and volume are enough to improve strength and size, yet novel enough to keep the training stimulation fresh. 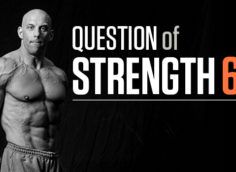