While there's been no weightlifter Gallop poll on this, it's probably safe to assume that most lifters think you need to, at least occasionally, hit concentric failure to maximize muscle growth.

There are a million and a half ways to do this, but one of the most popular is drop sets, a.k.a. descending sets. In general, drop sets are where you take a set to muscular failure and then immediately reduce the load by a pre-determined percentage or amount and pump out more reps until you hit failure again.

Depending on your ballsiness, goals, tolerance to pain, and whether you're late for a dentist appointment, you could keep on performing subsequent drop sets until you're curled up on the floor in the fetal position, desperately calling out to mommy or some deity to take away the pain.

But do drop sets work? Do they really maximize muscle growth? Muscle physiologist and T Nation contributor Brad Schoenfeld, along with researcher and Scrabble player's delight, Jozo Grgic, decided to take a look at the studies on the subject of drop sets to see if science supports their use.

Here's a synopsis of what they found, along with some drop set recommendations, lifted from their upcoming paper for The Strength and Conditioning Journal.

Researchers found that doing a low-intensity set (50% of 1RM) right after doing 5 high-intensity sets (90% of 1RM) led to a big spike in growth hormone (GH). The trouble is, as Schoenfeld and Grgic point out, recent research on the value of post-exercise GH spurts has shown it to be a virtual non-factor.

That sounds big, but the fatal flaw in this study was that they didn't control for training volume, so the increase from drop sets could have just come from doing more work in general.

I won't bore you. All but one of the studies addressed showed minimal or non-existent benefits, and the one that did, while showing a doubling of the cross-sectional area of the triceps among participants, received a ho-hum from Schoenfeld and Grgic because the findings didn't reach statistical significance.

Despite the disappointing findings about drop sets, they're one of those training methods that just feels right. Deep down, you kinda-sorta know they work, regardless of what some pasty researchers say. Besides, the failure of these studies to come up with positive findings could very well be from flaws in study design and not because of any failings of drop sets.

Even Schoenfeld and Grgic give you the feeling they want to believe that drop sets work, but of course they won't offer any conjectures because PhDs don't do conjecture.

Schoenfeld and Grgic did, however, offer some recommendations on how drop sets could best be employed, while cautioning that their continuous use over time might be detrimental because of possible decreases in insulin-like growth factor and testosterone, both of which are necessary for muscular growth: 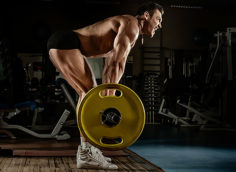 The RDL is awesome for posterior-chain strength. Fix these common mistakes and watch your gains skyrocket.
Training
Dan North March 4

Improve your rate of force development with this variation of the jerk.
Exercise Coaching, Tips, Weightlifting
Jason Brown January 5

This deadlift variation is often mistaken for cheating. It's not. Here's why, plus a great workout to try.
CrossFit, Deadlift, Tips, Training
Jason Brown December 10

Tired of hearing "eat big to get big" by dopes who've always been big? Finally, some smart advice from someone who's been there.
Bodybuilding, Training
Andrew Heming June 30