If the goal is to target the triceps, there's a more efficient method. Rather than butchering your body's natural mechanics, try using pre-exhaustion or pre-activation while maintaining the ideal mechanics and technique for the dip.

More importantly, you'll have emphasized the tri's while keeping your movement pattern intact rather than wrecking your natural body mechanics with a mutated variation of the exercise. 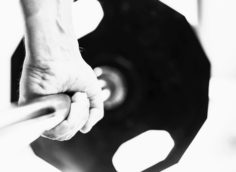 Most people think of cardio when they think of long-term health. Here's what they're missing.
Bodybuilding, Powerlifting & Strength, Tips, Training
TC Luoma May 31

Ditch the traditional core exercises and try out a few of these athletic moves for stronger abs.
Abs, Training
Scott Abel October 29

Yes, folks, I'm a deadlift-aholic. I don't just want to pull; I want to pull every minute of every day for the rest of my life.
Deadlift, Most Popular Deadlift Articles, Training
Eric Cressey March 17