When it comes to building muscle, conventional wisdom suggests you should lift heavy weights. But a new Canadian study claims you can reap the same effects by lifting lighter weights with more reps. Scientists out of McMaster University say that as long as you're lifting to the point of exhaustion (i.e. failure), your muscles will strengthen and grow.

"It's time to forget that little section in your exercise physiology textbook that says lifting light weights only leads to endurance and you have to lift heavy to get big or bigger," said Dr. Stuart Phillips, one of the study's co-authors, who notes the study dispels both those commonly held beliefs.

"Even with a lighter weight, you can get fatigued... all your muscle knows is it's hard to try to recruit all its fibers to generate that force. Your muscle doesn't understand or can't interpret the difference between fatigue induced by heavy weights versus light weights," Phillips adds.

In his previous work, Phillips came to the same conclusions, but in untrained men, who critics argued would bulk up regardless of their workout routine.

This time, Phillips and co-author Robert Morton recruited 49 healthy, strong men. They had been lifting weights for at least four years and visited the gym three to five times a week consistently in the lead up.

The group was split into two: One group lifted weights of up to only 50% of 1RM in sets ranging for 20-25 reps. The second lifted the heavier load of up to 90% of 1RM for sets of 8-12. The results after 12 weeks? Both groups had near identical gains in muscle mass and muscle fiber size, a key measure of strength.

Now, don't get it twisted: 25-rep sets to failure are no joke. This study isn't suggesting you can rep out curls using the pink dumbbells and expect a similar response to grind-it-out sets of 8 squats. But low-load, high-rep training may be just the tonic for your aching joints – and your muscles won't wither away as previously thought.

West and Phillips previously concluded that endogenous elevations of anabolic hormones after heavy lifting – such as GH, IGF-1, and Testosterone – have little to no correlation with hypertrophy and strength gains. The present study adds to these results by comparing the hormonal response of both groups, finding no such correlation.

As Schoenfeld noted, the argument for big weights doesn't account for the fact that fatigue may stimulate growth and that its onset can directly influence motor unit recruitment. When you lift a relatively light weight, motor unit recruitment is lower initially in the set than if you started with a heavy weight, but it evens out as you near completion.

The study suggests that if 1RM strength is the primary goal, performing the exercise of focus with heavier loads, either consistently or periodically, may be required for optimal strength gains – consistent with prevailing wisdom in the lifting community. So, yes, if you're trying to get your max bench up then by all means keep benching heavy.

High and low-rep training (low and high load, respectively) elicit a comparable stimulus for muscle hypertrophy and strength when resistance exercise is performed until failure. The study summarizes by suggesting lifting heavier and lighter loads should not be mutually exclusive, but instead be utilized during different training blocks.

Being a novice is a beautiful thing if you want to add strength and muscle to your frame at a shocking rate. Here's a program that will help you do just that.
Bodybuilding, Powerlifting & Strength, Training
Mark Rippetoe December 13 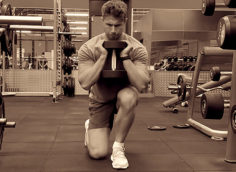 Got a couple extra minutes on leg day? Add these to your workout plan and try not to throw up.
Training
Gareth Sapstead December 21

Okay, you can lift weights together. But there are some differences you need to know, especially when it comes to rest periods.
For Women, Metabolic Conditioning, Tips, Training
Chris Shugart December 24