Behind the neck presses are one of the best shoulder-building exercises there is, and it used to be a staple among bodybuilders from the 50s up to the early 80s. It's the most effective pressing exercise for overall shoulder development. This is found both in the trenches and in the lab.

Someone with a normal posture and no shoulder mobility issues should have no problem doing the behind the neck press safely. There are only two kinds of people who will have problems:

It's not the exercise that's the problem. It's the fact that it can highlight pre-existing shoulder issues. If you add it to your training, make sure that you don't lack mobility or have a shoulder injury. Start light until you find your groove.

Who Does Behind the Neck Pressing?

Olympic lifting powerhouse, Dmitry Klokov, for one. He does it in various forms: wide grip, narrow grip, strict, and with a push. Many even call the wide-grip behind the neck press a Klokov press. 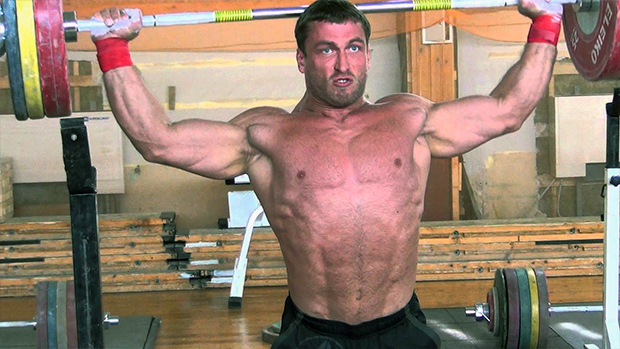 Klokov once suffered a serious shoulder injury attempting a 265-270 kg jerk from the racks in training. Afterward he started to emphasize various overhead pressing movements. Now, if a lifter who suffered a severe shoulder injury can do behind the neck presses with over 315 pounds, that's a sign that if you have proper mobility it's a not an inherently dangerous exercise.

Ted Arcidi, one of the first to officially bench press 700 pounds, used the behind the neck press as his main upper body builder. He too was able to handle hefty loads without compromising his shoulders.

Maybe it's time for you to re-think the behind the neck press too.

A simple warm-up routine that’s helped powerlifters, meatheads, and other anti-mobility dudes feel better and progress faster in their workouts with fewer injuries. Check it out.
It Hurts Fix It, Mobility, Training
Joe DeFranco October 21

Your warm-up shouldn't be boring or ineffective. Here's how to stretch the right parts, move with ease, and prepare to destroy your workout.
Mobility, Powerlifting & Strength, Training
Eirik Sandvik April 24

Can you really add a peak to your biceps? Well, you can certainly add some new size if you train the long head. Here’s how.
Arms, Bodybuilding, Training
Tim Henriques February 10