The landmine is a versatile tool because not only can you target the delts, you can also do so in a way that includes more upward rotation of the shoulder blades – much needed by most lifters and athletes. (Don't have a specialized landmine device? Just shove a barbell into a corner against a towel.)

Start in a half-kneeling position to better control pelvic and ribcage position. As you press up, try to "reach" at the top.

The "reach" is crucial. Not only are you getting some great upper trap activity, but more importantly, a ton of serratus activity. 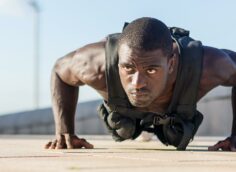 Think you've outgrown push-ups? Think again. Try one of these each week for seven weeks as a new workout challenge. And try not to cry.
Exercise Coaching, Push-Up
T Nation December 4

The original Bad Santa reveals the best assistance lifts, the best posterior chain movements, and the merits of the box squat as opposed to the standard squat.
Powerlifting & Strength, Training
Jim Wendler December 22
It never ceases to amaze me how trainees like to talk two and a half times their actual size. Only in the gym will complete newbies rant about their Ronnie Coleman-like genetics before even entering their first Mr. Akron contest.
Training
Don Alessi March 23

Take your core strength to the next level with this movement.
Abs, Exercise Coaching, Tips
Drew Murphy September 20