As anyone who's lifted weights for longer than a six-month stretch knows, resistance training is plagued by the principle of diminishing returns. The longer you do it, the slower the gains.

But rather than accept this fact, a lot of us devote a whole lot of time and mental horsepower into figuring out ways to get around it. Often, the solution is to just eat better (you dope), or to use supplements, drugs, or new training methodologies to get us back into growth gear.

Swiss bodybuilder and trainer Patrick Tuor took that last route, designing something called sarcoplasma stimulating training, or SST. It involves a whole lot of time under tension, reps, and sweat, all designed to get an acute muscle pump, which researchers such as Brad Schoenfeld have suggested plays an important role in muscle growth.

Of course, any mutt can come up with a training methodology, but Patrick Tuor was lucky enough to have his SST system chosen for laboratory testing by the Catholic University of Brasilia.

The scientists no doubt laid out a generous assortment of churrasco steak with chimichurri to lure 12 Brazilian young men, all of who had been weight training for between 2 and 8 years, to participate in their study. Each participated in three different biceps/triceps training sessions.

During the first session, they trained in a "normal" way, doing 8 sets to failure with their 10RM (the most weight they could lift for 10 reps). The other two sessions required the lifters to use Tuor's SST training methods. The first, as follows, is coined the "contraction type" version of SST:

The second version of SST they tested is the "rest interval variable" style:

The goal was to figure out what effect SST had on lactate levels and muscle thickness.

Oddly enough, at least to me, the SST style of exercise didn't increase lactate concentration any more than regular strength training. However, both styles of SST led to immediate increases in muscular thickness, with the "contraction style" training being slightly more effective than the "rest interval variable" style.

The results prompted the scientists to write: "Highly trained subjects may benefit from changing their resistance training routines by using the SST method, as this method may offer a superior muscle training stimulus..."

You may have raised an eyebrow when you read that the SST style resulted in greater muscle thickness in just one training session. Well relax that eyebrow. It wasn't because of an increase in actual sarcoplasmic hypertrophy; just a bigger pump.

But a bigger pump isn't something to take lightly. For one thing, a pump represents an increase in cellular hydration (the raising of water content in the muscle cells), which in itself appears to be a stimulus for muscle growth. Further, a pump apparently activates a membrane protein named "integrin" that's responsible for triggering anabolic processes within the cell.

(Biotest's Plazma™ protocol is based almost entirely on this physiological fact. The idea behind the supplement is to "force-feed" key nutrients into the muscle cell during the time the muscle cell is most responsive to nutrient uptake and growth signaling, otherwise known as the pump. Based on the scientists' findings, Plazma would marry well with the SST style of training.)

While the current study involved only biceps and triceps, I experimented with both the contraction style and rest interval variable style of SST training during recent back and chest workouts. While both created a lot of ouch, each led to an extremely satisfying pump, with the contraction style edging out the rest interval variable style in pressure exerted on the seams of my T-shirt.

SST is definitely worth trying, particularly if you're a veteran trainer who's having trouble urging your muscles into new growth. 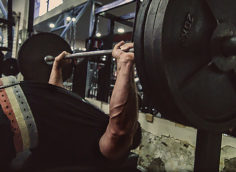 This simple drill will prepare your shoulders for an impressive press. Check it out.
Training
Gareth Sapstead August 15