Mental confidence is vital when it comes to lifting heavy weights. If the weight feels like it’s going to crush you, it likely will. You need to convince your mind that it’s up for the job.

Case in point, I was training to break the Canadian M1 83-kilogram IPF squat record. The record at the time was 210 kilograms. My goal was 211 kilograms. My first step was just getting used to standing up with the record weight. The first time I stood it up, it felt like my spine was going to shoot out of my back. After doing this a few times, I stood up and walked the bar out. Again it felt heavy. My knees felt weak and my ankles hurt just walking it out.

I did a few squat walk-outs (where you walk a heavily loaded bar out of the rack but don’t squat it) over a period of two weeks. I remember one time walking out and thinking, “I can’t f’ing squat this!” The following week I did. The next week I hit it for 2 singles, and 4 weeks later I hit it on the platform and broke the squat record.

The method is called CNS overloading, and it’s going to get you handling weight anywhere from 10 to 20% above your 1RM. It’s also going to give you supreme confidence in handling bigger weight, along with arousing your nervous system.

Before your first squat, or before going for a new 1RM, add 10-20% more weight than your standard rep to the bar and hold it in the locked-out position for 5-10 seconds. Let’s say you’re attempting a squat 1RM of 400 pounds. Do your warm-ups like normal, but before you attempt to squat the 400, do a squat walk-out with 420 or 440 pounds. 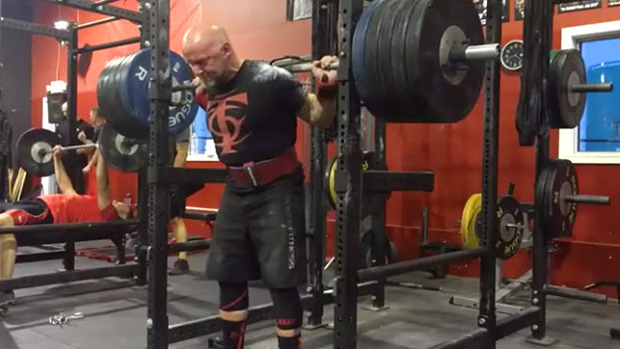 About to attempt a bench 1RM of 300 pounds? Follow these steps: