Bands can be extremely useful to facilitate a solid posterior weight shift and safely strengthen the quads. Here are some different ways you can use them to serve your needs.

For true single leg work like one-leg squats and skater squats, attach one end of a band to a sturdy post and loop the other end behind your knee. From there, do the exercise as you normally would.

The band forces you to sit back to avoid being pulled forward, thereby loading the hips and taking stress off the knee at the bottom portion of the rep. As you come up, it shifts from a hip dominant movement pattern to a more quad dominant terminal knee extension (TKE), allowing you to strengthen the vastus medialis (VMO) within a more knee-friendly range of motion.

You can also do something similar to split stance work, only it's better to attach the band to a belt rather than putting it behind your knee. Make sure to set up with a longer stride such that your tibia is perpendicular to the floor.

The band increases the demands on the quads because you have to continually push through your toes to grip the floor and maintain stability, but it does so within safe joint ranges because it's simultaneously driving you to sit back and maintain a vertical shin to keep from getting pulled forward.

The cable doesn't drastically alter the squatting pattern but still allows you to practice free squatting while reflexively teaching you to sit. A band also works in a pinch here too.

Master tension and build anti-rotation strength. Work up to 50 percent of bodyweight for 5-10 reps per side.
Bench Press, Exercise Coaching, Tips
Ryan Taylor May 23 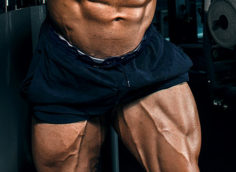 This seated variation of the box jump helps athletes develop power from the ground up.
Athletic Performance, Exercise Coaching, Tips
Wil Fleming May 25

Sets, reps, time under tension, rest periods, and everything you need to know to DIY the right plan for you.
Bodybuilding, Powerlifting & Strength, Training
Mike Robertson February 6