One of the most basic ways to boost intensity is to train to concentric failure. In other words, continue each set until you can no longer apply enough force to move the weight. This is harder than most people train, but I don't think it's so taxing that you'll overtrain if you do more than one set. You can do two sets of an exercise, and occasionally even three sets.

The phrase "rest-pause" is used in different ways in different contexts. The basic idea is that you extend a set by pausing between reps to allow your muscles to recover. Trainers have come up with multiple ways to use the technique.

Upon completion of your last rep in a set, hold the weight in the contracted position for a long as possible. It's safe, effective, and gives your sleepy motor units one hell of a wake-up call!

Iso-holds work best on exercises where there's tension in the contracted position. It's really hard to keep yourself at the top of a pull-up, for example, which is why it's a great exercise for iso-holds. But on other exercises, like presses and curls, you can hold the weight for a long time in the top position. So if you were to try iso-holds with those, you'd want to lower the weight a bit to increase the tension.

Use it judiciously. If you're doing multiple sets of an exercise, use an iso-hold for the final rep of the final set.

These are similar in nature (and in the amount of trauma they induce) to isometric holds. When you get to the end of a set and can't complete another full rep, you do a few partial reps to take your muscles to complete exhaustion.

Some of the best exercises for partial reps are calf raises and machine pullovers. With a good spotter, though, you can do partials with just about any exercise. You just have to get to the easiest part of the range of motion and avoid the hardest part. So on a bench press, for example, the spotter would help you get the load off your chest after you've hit concentric failure. Then you'd do partials in those last few inches before lockout.

As with isometric holds, don't do more than one set of partials on any given exercise.

I'm not a huge fan of forced reps – in which your training partner or spotter helps you complete the concentric portion of a few reps at the end of a set – simply because they're too easy to abuse, and they make you reliant on someone else to up the intensity of your workout.

If you want an example of how bastardized this technique has become, just go to any public gym at 5:30 PM on a Monday and watch what goes on at the bench press stations. Count how many times someone says "all you!" when it's really about 50-50.

But just because the knuckleheads misuse it doesn't mean it isn't a great tool for boosting intensity... as long as it's used sparingly. A couple of forced reps on one set of one exercise per workout go a long way.

When you slowly lower a weight that's heavier than anything you could move concentrically, you'll induce more microtrauma within your muscles than you can with any other training technique. It's like dynamite. Blow up the stuff you're trying to blow up, and it's a great tool. But the potential for collateral damage is huge.

I prefer to use a less traumatic version of negative reps. Instead of starting with a weight you can't lift concentrically, use a weight you can lift multiple times and only use a slow negative after you've hit concentric failure. Since the weight you're lowering is lower than your one-rep max in that exercise, you avoid annihilating a muscle to the point that it's FUBAR.

You're not starting a lawnmower when you do dumbbell rows. Here's a better way to row for big gains.
Tips, Training
Eric Bach December 8

Everything you need to know about the deadlift in one sentence. Really. Check it out.
Deadlift, Tips, Training
Mark Rippetoe May 17 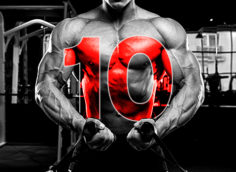 Big lifts lead to big gains, but they may not all fit your long-limbed structure. Try these variations and watch your progress skyrocket.
Training
Andrew Heming July 2