Real complexes originated in the Soviet Union. Complexes are simply blocks of exercises. The Soviets used only two exercises in their complexes – one strength-movement and one power/explosive movement. The idea was to work both extremes of the strength curve.

I've taken the concept of complexes and ramped it up. Instead of training only two points on the force-velocity curve, I train around five points, which is why I call them star complexes. (This is part of my 6 Weeks to Superhero program.) https://www.t-nation.com/workouts/6-weeks-to-superhero

Each complex will use five exercises of the same movement pattern. The five exercises will be performed back to back, starting with a heavy/slow movement as the first exercise. Each subsequent exercise will be lighter in resistance than the previous exercise, allowing for progressively faster rep speeds. Here's an example using the bench press: 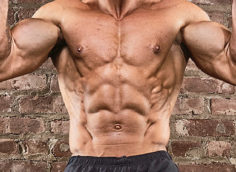 Test yourself, gain mobility and functionality, and pick up some newfound strength across a greater range of motion. Here's how.
It Hurts Fix It, Mobility, Training
Eric Buratty November 8

Some of our greatest accomplishments are the result of good mentoring. Here’s who guided 5/3/1’s Jim Wendler.
Motivation, Training
Jim Wendler June 19