The Dawn of 30-Minute Workouts?

When I first started lifting weights, I lifted for two hours a day, six days a week, because that's what Joe Weider told me to do. Those weren't his direct instructions, but that's what was implied by the workouts of the professional bodybuilders featured in his flagship magazine, Muscle & Fitness.

The trouble was, neither me nor any of the other poor newbies that followed that training template knew that all those freaks were on steroids. It just wasn't talked about... ever. As such, we didn't know that the drugs allowed them to get away with training so much and that we should have been following an entirely different set of rules.

My two-hour workouts probably slowed my progress more than enhanced it, but worse than that was all the stuff I missed out on from being in the gym all the damn time. Missed parties! Missed weddings! Even missed funerals (sorry Ma, sorry Pa, sorry Aunt Trudy, sorry Duke)!

I had so little spare time that the only woman whose touch I knew all those years was the female powerlifter whose calloused hand would sometimes brush against mine when she spotted me.

For all that, I've often wished I'd put an axe in Joe Weider's chest. Man, I'd do it now if I knew where he was buried and was willing to put up with all the flak from the woke people who'd be offended by my belated act of vengeance.

Anyhow, as I grew more knowledgeable, my workout periods shrank by at least half and I made a lot more progress. Thank you, exercise science.

But what's this? A new study says I could probably halve my gym time AGAIN. It actually says that if I do multi-joint exercises, then all my single-joint exercises (biceps curls, triceps extensions, etc.) are a waste of time. That means no direct biceps work and no direct triceps work, among other things, and the findings even apply to steroid users, too.

Could this be the dawn of 30-minute workouts?

Brazilian scientists rounded up 30 male bodybuilders, each of whom had been training for at least three years. They split them up into four groups.

The workouts programs were fairly sophisticated. Each lifter worked out 6 days a week and they were required to vary rep ranges and rest intervals from week to week. A typical Monday/Thursday workout consisted of the following:

Since elbow extensions are a single-joint exercise, they were excluded from the workouts of both the natural and the steroid-assisted multi-joint exercise groups.

Each lifter was also required to take in 2.5 to 3 grams of protein per kilogram of bodyweight.

Adding single-joint movements to their workouts was pretty much a waste of time in both the "natural" group and, surprisingly, the steroid group.

The steroid users, of course, made far greater gains overall than the natural lifters. The researchers wrote the following in their conclusion:

"The addition of single-joint exercises to a resistance training program that already contains multi-joint exercises brings no additional benefit in terms of muscle performance and anthropometric changes in trained men, whether they are using anabolic steroids or not.

"These results might help to design more time-efficient resistance training programs, since it suggests that trained men can save time not including single-joint exercises in their routines and still achieve optimal results."

At the very least, the study's results probably still don't apply to the pro bodybuilders that mucked up my early training days or their current counterparts. Unlike the steroid users in this study who used less than a gram of steroids a week, modern pros often use upwards of 3 grams a week.

But what about the rest of us? There's a big part of me that suspects the findings are at least partly correct. After all, there are plenty of powerlifters, Olympic lifters, and even gymnasts who have enviable arms and most of them don't even know how to do a curl or extension.

I also suspect that one major exception to the scientist's conclusions concerns the hamstrings. They're a dual function muscle group and it's unlikely you could get them to grow to any noticeable degree without at least doing some sort of leg curls, which are a single-joint movement (when done correctly, at least).

The scientists who put the training program together must have agreed because, while they only had the single-joint training groups doing leg extensions, all groups were required to do "knee flexion" (leg curl-type) exercises.

I guess there's only one way to find out if the results of this study pertain to you: Punt your single-joint work (at least for arms) for a couple of months and see what happens. If you want to work triceps or biceps, work them with multi-joint movements like close-grip bench presses or weighted chin-ups.

You have 20 minutes to complete the five events of the Mantathlon. Can you do it?
Challenge Training, Metabolic Conditioning, Metcon, Training
Martin Rooney February 26

Five reasons to start sprinting today, plus a 6-week plan to get you started.
Training
Charley Gould January 21

Pain tolerance is a requirement for mental and physical strength. Welcome it. Here's the deal.
Tips, Training
Matt Kroc September 18 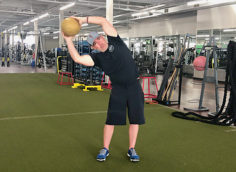 This is tougher than it looks. Add to the end of your ab training for all-around core strength.
Abs, Exercise Coaching, Tips
Nick Tumminello November 16